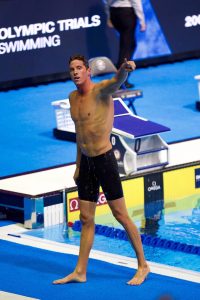 Conor Dwyer points to his family after swimming the 200 freestyle at the Olympic Trials. (Photo courtesy of Jeanne Dwyer)

For one, the Winnetka product and Loyola Academy alumnus is faster and smarter than the swimmer who won a gold on the 4-by-200 U.S. relay team in London. And he has the best advice about his sport close at hand, as Mr. Swimming Michael Phelps’ frequent roommate and dog sitter.

“Maturity-wise, I’ve made big strides working with my coaches and handling myself at the bigger meets,” Dwyer said, interrupting himself briefly to issue a command to Phelps’ new puppy at the latter’s Los Angeles home.

“I worked a lot on my mental game. I matured a lot as a swimmer the last two years. I followed guys a lot. I’m right around my prime at 27. I would say I’m still peaking. Until you stop going best times, that’s when your peaking stops.”

And few things assist in reaching one’s water-borne peak as learning from Phelps.

“In 2013 and 2014, I trained a lot with Michael and soaked in some stuff with him,” Dwyer said. “At age 25, when I moved out of Los Angeles, I really wanted to learn how to make myself better and turn my training, both mentally and physically, to a whole new level.”

Now 27, as he represents the U.S. in the Rio games in three events — trying to repeat in the 4-by-200 along with debuts in the 400-meter and 200-meter freestyles — the counsel of 18-time Olympic gold-medal winner Phelps will kick in at just the right time. Dwyer has been close to Phelps as an Olympic teammate and roommate going on five years now.

“At practice, he is an unbelievable mentor,” Dwyer said. “We were away from each other for a year until we did altitude camp together. He even saw how next-level my training and recovery got this year. He was a really influential guy making his fifth Olympics this year. It’s awesome to be on my second Olympics with him. He’s an awesome leader on any team. 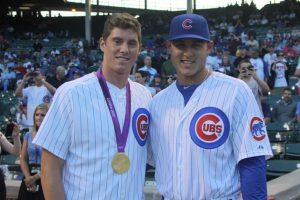 “Under the lights, he’s second to no one as far as performing when it matters. I can count on him to win 100-fly at a big meet, whenever. He gives small advice to me before races. He’ll say, ‘Conor, I’ll say what you’ve done for the 200 and 400, no one should beat you this year. This is what I think you got to do and practice.

“We room together at Olympic trials (in Omaha). We’re more just friends. We’re hanging out as big sports fans, big foodie guys. We go out to dinner, more low-key friends.”

Phelps gets recognized everywhere he goes, and now it’s rubbing off on the 6-foot-5, 195-pound Dwyer, almost like Batman and Robin.

“It’s crazy,” said Dwyer. “It’s fun to give back to the little-kid swimmers. I remember me being at that young age, meeting other Olympians at swim camps. It’s just fun to try to help what Michael did to elevate swimming to where we’re selling out an arena of 14,000 for eight days straight. I don’t know if anyone thought swimming would get as big as it is. Now they say it’s swimming, gymnastics and track as far as world popularity in the OIympics.

Flat-out, Dwyer said Phelps was the Tiger Woods of swimming.

The swimmers’ sheer athleticism combined with mental training has been copied by other athletes. 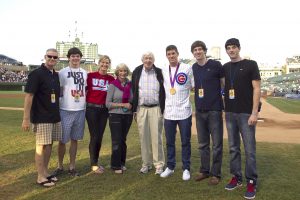 “I think a lot of NFL guys like J.J. Watt and other athletes are trying to train like Olympian (swimmers) as far as eat, sleep, recover,” Dwyer said. “No one trains as hard as we do in and out of the water. People start to recognize as far as our swim workouts and our dry-land weight routines. They think of us as athletes, not just swimmers.”

While Phelps is the ultimate veteran with a reputation, now Dwyer will be the experienced swimmer offering advice to first-time Olympian Olivia Smoliga of Glenview. Smoliga’s failure to make the 2012 team as an incoming Glenbrook South senior in the Omaha trials apparently toughened her up make the cut this year.

“I’m friends with Olivia,” Dwyer said. “She got here for a reason. I’d tell her just enjoy the ride. You’ll have a blast. I’m excited to be on the team with her.”

Dwyer has been the national champion in the 200 and 400 freestyles at the 2015 AT&T Winter Nationals. He also won a silver medal in the 800-meter free relay at the 2015 FINA World Championships .

Mom Jeanne Dwyer was an All-American swimmer at Florida State University. His late maternal grandfather Jim Dowdle was one of the most successful media executives in recent Chicago history. Running Tribune Broadcasting, Dowdle went out on a limb late in 1981 to hire the controversial Harry Caray away from the White Sox for WGN’s Cubs broadcasts. Then, in 1994 as Tribune Company overseer of the Cubs, Dowdle “cut the cord” of day-to-day corporate control of the team that had led to disasters such as Greg Maddux’s free-agent defection two years earlier. 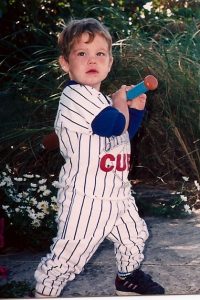 The two previous generations were Dwyer’s biggest chearleaders. Jim Dowdle rarely missed a swimming meet or Little League game despite his busy schedule. In turn, Conor Dwyer got to tag along with his grandfather to see the Cubs inside-out, home and road.

“We went to Denver and he brought us into the locker room where we tried on Scott Servais’ catching gear,” he said. “Jim Riggleman was always a good family friend.

“We’re going to be running deep into October — I have faith,” said the loyal Cubs fan.

But Dwyer has many laps to swim under the bright lights before then. There is unlimited room in the family trophy case of accomplishments for more gold medals.