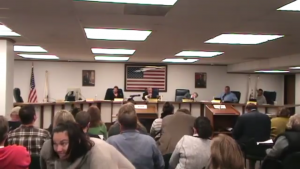 A group hoping to let citizens vote whether to ban video gambling in Forest Park hit another bump in the road when the village council voted Oct. 24 to approve games at local bars and restaurants.

Four of five village commissioners all voted yes, except Mayor Anthony Calderone, who abstained. Calderone later said he chose not to vote because of his dual role as liquor commissioner.

A binding referendum banning video gambling was thrown off the Nov. 8 ballot after members of the citizen-based Say Yes to a Vote failed to acquire enough valid signatures. Before the vote, the group had vowed to start from scratch and gather another batch of around 3,000 signatures of registered voters in the village with a population of 12,000.

At the meeting, members begged the council to table the ordinance until after the April, 2017 election.

“Please don’t push this though tonight, because if you do you’re going to lose the trust of thousands of Forest Parkers,” said Geoff Binns-Calvey, who said he had been collecting signatures all summer. The group gathered 2,267 valid signatures, after a challenge — 162 signatures short of the 25 percent of active and inactive registered voters required.

“I object to your disregard for the fact that we have an ongoing petition drive to get the issue on the ballot in April 2017,” said 28-year resident Donna McCune.

“You are completely dismissing the majority of citizens who want a voice on the ballot box for this issue. Why are you afraid of a vote?”

“Video gaming passes in Forest Park. Now we have to prove we are deserving,” wrote Elmhurst resident and owner of six Forest Park bars Martin Sorice Sr. on a Forest Park website.

The debate has fractured the town, pitting neighbor against neighbor and business owners against each other. Opponents, both residents and business owners, complain that video gambling signs would coarsen the environment of the main shopping district on Madison Street, where a string of taverns are sprinkled among boutiques and restaurants. Others fear property values will decrease. Village staff have said up to 235 terminals could be established in town, based on five terminals for each of 47 local liquor licenses.

The one thing bar owners and ban supporters could agree on was their dislike of “convenience gambling cafes” such as “Dotty’s,” “Stella’s” which have popped up in Berwyn and neighboring towns. Called “Cracker Barrels with video poker,” gaming cafes are designed to appeal to gamblers – mostly middle-aged women – who don’t feel comfortable in a bar. They are owned or franchised by terminal operators and employ minimal staff.

The Forest Park ordinance seemed to address both of those objections. The new rules prohibit signs advertising that video gaming terminals are inside the bars. The ordinance dissuades convenience parlors from opening by mandating a one-year waiting time and prohibiting any business solely devoted to video gambling. A $5,000 “Class V” liquor license should also dissuade cafes.

Opponents were skeptical that a sign ban would survive a lawsuit, potentially financed by deep-pocketed video terminal operators. At a video gambling town hall, the village attorney conceded that the village could not regulate what a sign could say based on the First Amendment. They also worried that existing restaurants or bars could morph into gaming cafes. They worried a $5,000 extra liquor license would be challenged, since state laws say non-home rule communities could only charge a license fee of $25 per terminal.

But commissioners urged voters to give the video gambling a chance.

“I’ve looked long and hard at this, and I just think, if it goes ahead there’s going to be a trial basis there,” said Commissioner Joe Byrnes. “If it’s not working I’ll be the first guy in line at the election to vote it down.”

Calderone defended bringing the issue to a vote with a post on a social media site: “I have spent the last 6 months driving to communities that have video gaming to observe what takes place, how do the streets look and feel. I did not observe any chronic gambling. What I did observe was people having short term fun, in fact in all of the places I went too [sic] most of the time the machines were not being played,” Calderone wrote. “The notion that Madison Street might end up looking like a casino is simply wrong.”

But those who wanted to bring the issue to the voters appeared even more determined to collect signatures. Some disappointed residents vowed online to vote out the sitting commissioners or boycott restaurants with video terminals. Patrick Jacknow, a local realtor who paid lawyers bills for the first go-round of petition challenges, announced he would run for village commissioner in 2019.

“Video gambling is not what the majority of people in this town want,” Jacknow said, in public comments.

“For many residents, this is beyond video gambling at this point. It’s about feeling totally disheartened and disenfranchised by not being given the ability to vote on this,” said business owner Noel Eberline. “A Herculean effort was made to gather almost 3,000 signatures [but] the group of business owners who stand to benefit from video gambling put a strong and forceful stop to keep the referendum off the ballot.”