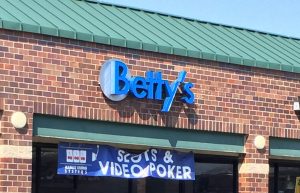 Video gaming parlors such as this one may be prohibited in Forest Park after residents in the village voted to ban video gaming Nov. 6. (Chronicle Media photo)

The rescinding of video gaming in Forest Park is inevitable following a narrowly decided binding referendum approving its prohibition.

However, at least one and possibly two steps need to be taken before video gaming actually becomes illegal in the Near West community.

For three years, a group of citizens sought to have the question “Shall video gaming be prohibited in Forest Park?” certified and placed on the ballot. Over that time they were frustrated by a series of “nuisance referendums” filed to fill the ballot with the maximum three referendums allowed per election under Illinois law.

For gaming machine opponent Jordan Kuehn, just seeing the issue finally come to a public vote was a victory.

“We have a large group and people worked for three years to even get this on the ballot,” Kuehn said. “The ability for voters to say ‘yes’ or ‘no’ was validation enough. We fought tooth and nail and went to the Illinois Supreme Court. Just for residents to be able to  make a choice was great.”

To have more than 60 percent of registered Forest Park voters cast a ballot on the referendum was incredible, Kuehn said.

“I feel it vindicated our effort,” he said.

Kuehn, chairman of the group Let Forest Park Vote on Video Gaming, said the case was “very much a David and Goliath situation” with their resident group having to get 25 percent of the number of voters in the last municipal election to support just getting the referendum on the  ballot.

He added that the Let Forest Park Vote group was drastically outspent in the referendum campaign as well with his group raising $5,000 to send out two flyers and a couple of handouts. Supporters of the gaming machines, constituting the Let Forest Park Grow group raised $67,000, almost all from out-of-town companies that operate the gambling machines.

“They were sending stuff out every week, sometimes twice a week,” Kuehn said. “We were all volunteers. We had to take off work the whole day to watch the polls.”

He said village officials twice asked residents about video gaming – once in a water-bill survey and, in 2013, in a non-binding referendum. In both cases, residents overwhelmingly said they were against the machines being in the village, Kuehn said.

In 2016, the Forest Park Village Board passed an ordinance legalizing video gambling under a state statute.

“Residents felt slighted,” Kuehn said of the Village Board’s action. “This election was their chance to weigh in. The Village Board did not care what constituents had to say. That is why we wanted to bring this issue to a vote.”

Following a months-long court battle, an appellate court this past spring overturned a ruling by the Forest Park Electoral Board and ordered the video gaming referendum placed on the ballot. By Nov. 6’s Election Day, a record 6,301 votes were cast, and “yes” outnumbered “no” 3,239-3,062, a very slim 177 difference, less than 0.3 percent of all votes cast.

Citizens in Palos Heights also voted to prohibit video gaming in their town this election, but that southwest suburb had not legalized video gaming.

The question now is what needs to happen for the results of the referendum to become law. Some say video gambling will automatically become illegal in Forest Park when the referendum result is certified. The deadline for the counting of remaining absentee ballots is “not later than 14 days after the election.”

The Illinois State Board of Elections, which must formally certify all county election results, is tentatively set to meet Nov. 30.

However, others say it’s likely an ordinance must be passed for video gambling to become illegal in the village.

Gene O’Shea, a spokesman for the Illinois Gaming Board, agreed that nothing happens until the the results are certified. Asked what mechanism exists to formalize the referendum results, he replied, “That’s a good question.” He suggested the next step is Forest Park’s to take, saying, “We’re waiting on Forest Park.”

Attorney Ed Mullen, who represented the Let Forest Park Vote campaign in its petition battle, said the referendum is “self-executing.” He pointed to the wording of the Illinois Video Gaming Act, which reads, “If a majority of the voters voting upon (the proposition) in any municipality or county vote ‘Yes’, such video gaming shall be prohibited in such municipality or county.”

“Video gaming should be prohibited when the referendum is certified without any other action from the village,” Mullen said via text.

Forest Park Village Administrator Tim Gillian agreed that moving forward on the issue will require certification of the referendum results by Cook County, but suggested an ordinance will also be needed.

“We will await certification from the county on the results,” he replied to an email inquiry. “We are also seeking advice from counsel on steps after that, but I suspect an ordinance will be required.”

Ben Silver, an attorney with the Elmhurst-based Citizen Advocacy Center, said he came to a “similar conclusion” as Mullen.

“The statute is very sparse on this,” Silver said, but, “it reads very, very clearly that it’s prohibited. It says that once (the referendum) is certified, (video gaming) is prohibited.”

Silver said that passing an ordinance might be advisable “to clean things up, to make things clear.”

“Typically you want to pass an ordinance to take it off the books,” he said, “but it doesn’t have to be because state law is superior here.”

Jordan Kuehn, who chaired the Let Forest Park Vote campaign, said he would defer to Mullen.

“Ed Mullen is our lawyer, so I’ll go with whatever he said,” Kuehn said. He noted that, as he understands things, the Illinois Gaming Board has the final say as all video terminals go through a central board controlled by the IGB.

“The IGB can unilaterally turn the machines off at those establishments” he said.

The village receives 5 cents of every dollar wagered in the gaming machines in bars in the community.

“We are not getting much for the large social costs of people pouring money into machines,” Kuehn said. “… The machines are a negative element on a major street in town.”

The Let Forest Park Vote spokesman said that Madison Street now has a nice variety of restaurants, including some high-quality eateries.

“That’s a trend I would to see continue instead of the Band-Aid income from beer-and-shot bars,” Kuehn said. “There is a place for both. Forest Park has a big enough blue-collar population  that a beer-and-shot bar has its place. We just don’t need 20 of them.”

He said the $150,000 annual income the village would lose with the elimination of video gaming equates to 0.5 percent of the annual budget.

— Video gaming will be prohibited in Forest Park … eventually —-