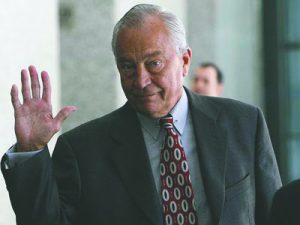 A high-powered Chicago attorney and former alderman is facing up to five years in prison for federal tax evasion.

Vrdolyak admitted in a plea agreement that he assisted another lawyer, co-defendant Daniel Soso, in evading federal income taxes owed by Soso from 1993-2004 and 2008-13.

The income was derived from attorney fees received in connection with the $9.2 billion settlement between the state of Illinois and a number of tobacco companies in the 1990s.

At the time of the settlement, Vrdolyak and Soso were licensed Illinois attorneys. The pair collected legal fees from the settlement pursuant to agreements with one of the attorneys who represented the state.

Pursuant to the agreements, Vrdolyak made payments to Soso between 2000 and 2005 of $1.9 million, representing Soso’s agreed-upon share of the fees for the tobacco litigation.

In 2005, the Internal Revenue Service served a notice of levy on The Law Offices of Edward R. Vrdolyak, which required the turning over of all salary, wage and other amounts owed to Soso. Over the next two years Vrdolyak received $262,854 due Soso, but the former alderman concealed receipt of the funds from the IRS, knowing such concealment would assist Soso in evading the payment of taxes and assessments due to the IRS, according to the plea agreement Vrdolyak signed.

Vrdolyak later caused $170,242 to be paid to Soso instead of remitting the funds to the IRS.

The government went after Vrdolyak in 2002 for allegedly defaulting on a $391,000 Small Business Administration loan. However, prosecutors dismissed that case a week after it was filed.

Vrdolyak served 10 months in prison after he pleaded guilty in 2010 to a plan to bilk Chicago Medical School in a land deal.