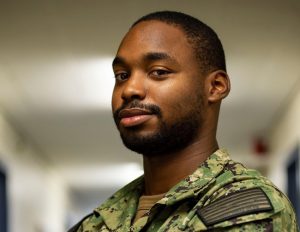 Seaman Jimmie Logan is a Navy ship’s serviceman aboard the guided-missile cruiser.

A ship’s serviceman is responsible for the ship’s store, customer service and bringing morale to the ship with products,” said Logan.

“The best part of the job is learning the skills that will last a lifetime,” Logan said.

Logan credits success in the Navy to many of the lessons learned in Maywood.

“I learned to make the most of what you have,” Logan said.

U.S. Navy sailors, like Logan, are stationed both stateside and on the high seas aboard surface ships around the world. Philippine Sea is one of more than 60 ships on the east coast of the United States as part of Naval Surface Forces, U.S. Atlantic Fleet.

U.S. Navy ships are deployed globally, and their presence helps the Navy control the sea. Sea control is vital to project power, secure common areas, deter aggression and assure allies when and where desired.

Due to its extensive combat capability, Philippine Sea is able to fire Tomahawk Cruise Missiles and other weapons as part of sustained combat operations against targets on and below the sea, in addition to hitting targets hundreds of miles over the land.

The ship is equipped with the Aegis Combat System, which integrates the ship’s electronic sensors and weapons systems to defend against anti-ship missile threats. The ship’s air search and fire control radar provides continuous search and tracking of hundreds targets simultaneously.

The crew of more than 400 sailors build a strong fellowship while working alongside each other. The sailors are highly motivated, and quickly adapt to changing conditions as part of a busy life of specialized work, watches and drills.

“If you ever need help I can just ask a shipmate. You get to know that person and it creates bonds that last,” Logan said.

Though there are many ways for a sailor to earn distinction in their command, community, and career, Logan is most proud of temporarily being the master helmsman and steering the ship.

As a member of one of the U.S. Navy’s most relied upon assets, Logan and other sailors know they are part of a legacy that will last beyond their lifetimes, one that will provide a critical component of the Navy the nation needs.

“Serving in the Navy means I am able to protect the ones I love and I am doing something important for my country,” Logan said.