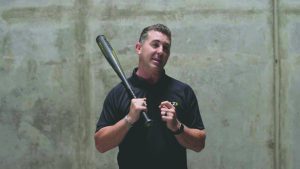 Hitting guru Matt Lisle shares batting tips during a session. Lisle, who is now the hitting analytics coach for the Chicago White Sox, was living in his car less than a decade ago. (Photo from YouTube video)

Finding a way to reach home safely is on the mind of every baseball player and coach.

Just finding a home weighed heavily on the mind of hitting expert Matt Lisle less than a decade ago.

Lisle, who is the hitting analytics coach for the Chicago White Sox, wound up living in his car in 2010 when his income dried up as a high school coaching job ended and baseball camps he was trying to start up didn’t materialize.

“I was trying to get the camps going and it all came crashing down. I was doing part-time gigs and the bills piled up,” Lisle said. “The house I rented, I negotiated to stay one more month in exchange for them keeping my deposit.  After that, I put my stuff in storage and did not pay the bill. I bounced on friends’ couches and I stayed in my car. I was at rock bottom.”

Lisle said he battled his own demons as found himself sleeping in his car, trying to figure out his next step.

“I was fighting a lot of negative voices, fears and depression,” Lisle admitted. “It was very difficult.”

He was able to land an associate scouting position with the Detroit Tigers and another high school coaching job to get back on his feet. Able to pay his bill, he got married in 2011; and shortly, thereafter got a job coaching softball at the University of Oregon.

At that point, Lisle, who had been sharing his hitting wisdom via social media since 2010, began building up his online presence.

“From 2010-13, there were no hitting gurus on social media, on message boards,” he said. “There were older guys like Mike Epstein who knew hitting but they were not on social media.”

Lisle said it was “a perfect storm of timing” that got him to be one of the internet’s leading experts on hitting.

“I found I had ideas and thoughts about hitting,” Lisle said. “I had a lot to say about that.”

He said working with Major League Baseball players for the past six years has added to his social media following, which now tops 650,000. Lisle said that MLB exposure has definitely helped build his credibility.

“Nine years ago, when I was in my car, trying to coach, no one cared what I tweeted or said. However, I established credibility and it dominoed from there,” Lisle said.

The California resident was a volunteer assistant coach for the University of Missouri and was in line for a full-time paid position for the 2019 season. However, rumors began spreading that the third assistant coach position might not get the university board of trustees’ votes necessary to pass.

“When I heard it might not pass, I thought, ‘I’ve got five kids and a stay-at-home wife,’” Lisle said.

Five major league teams, including the White Sox, heard the same rumor and reached out to Lisle. Chris Getz, the White Sox director of player development, interviewed Lisle, as did a few other teams.

“Chris Getz believed in what I was doing,” Lisle said. “It was a no-brainer when he made me the offer after I talked to him.”

Lisle, who has been with the South Siders since November, said the White Sox did not want him to divulge much on what his job with the organization entails.

“I can say my role is to support the analytics department to help the coaches for player development,” Lisle said.

The 18-year baseball coach admits that he had no backup plan for his future. A talented baseball player, he expected to be playing in the major leagues. Injuries when he was at California State — East Bay changed that scenario.

The injuries coincided with Lisle becoming a dad at 19 years of age.

“Until I was 19, I dreamed of playing pro baseball,” Lisle said.  “I had no plan B. My daughter, who’s now 22, brought everything to a crashing halt. I still had the opportunity to play ball overseas, but at the end of the day, I took a self-inventory and said, ‘There’s got to be another plan.’ Things have worked how the dream was supposed to be.

“It was a case of my plan versus God’s plan. Things worked out exactly how they needed to be.”

Now the father of five, Lisle said he is viewed more as “Dad” at home than as “Coach.”

He said when his hectic travel schedule allows him to be home, he will provide his pearls of wisdom on hitting to his children at practices and games.

“The response I usually get is ‘I know, Dad. I know,’” Lisle said. “A couple of them will listen to me. A couple of them are like ‘Yeah, OK.’ I have more credibility as ‘Dad’ than as ‘Coach’ in my own home.”

Lisle admits that he didn’t make his early adulthood a cakewalk.

“I was a dad at 19. I made life tough on myself,” the hitting guru said. “At 19, a lot of people are going off to college. I moved out at 19, with no financial support. I always had to scrape and I was always grinding. I did not have time to take days off. I had to pay my bills, feed my kids.”

Lisle said that pretty much every day he wakes up and says, “I can’t believe what has happened in the last 10 years.”

“I remind myself of that all the time. I know how blessed we are. There are many coaches who are better than I am at their job,” Lisle said. “A lot of luck has come into play with how things have worked out now. Some of the best coaches I have ever been around have been at the high school level.

“It is not lost on me how incredibly lucky I have been. I never thought social media would change m life. I don’t take this lightly.”