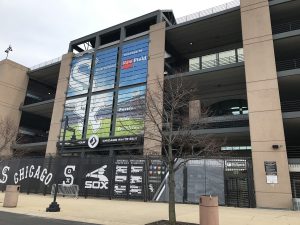 When you batter up for the Chicago White Sox home opener on Monday, April 3 against the Detroit Tigers, why not batter up with battered onion rings?

Prepare to ooh and ah over those big ol’ “O” shaped rings.

For $28, you can get a homerun-sized mac and cheese sandwich, about a third of a length of a 42-inch baseball bat.

Add in the protein for $6 (which is the brisket) and you’ve got yourself a whopper of a meal at $34 for one heck of a rain delay or date to remember. 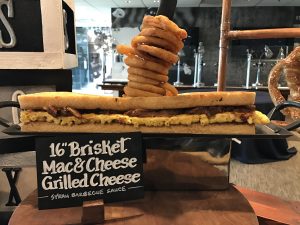 The buffet that Wednesday in the club featured selections such as home-baked pretzels, a chicken margarita sandwich and a dessert, a Choco kebab that looked similar to a large slab of gyros sliced in sandwich shops.

“Which is my favorite?” Respeto said, responding to the question by reporters.

“Actually, the brisket mac & cheese grilled cheese,” she said with a smile.

Officially called “The 16-inch Brisket Mac & Cheese Grilled Cheese,” the sandwich is one of the menu introductions for the 2017 season. 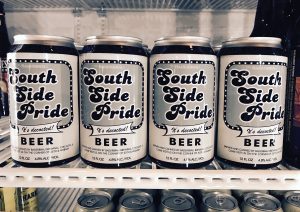 South Side Pride is apparent in the refrigerated cases in the Craft Kave. (Photo by Karie Angell Luc/for Chronicle Media)

Fans can look forward to newbie concession offerings such as South Side Mini Donuts, served warm (Sections 110, 155 and 531).

“It’s a nice new concept taking from our neighbors in Chinatown,” Spalding said. 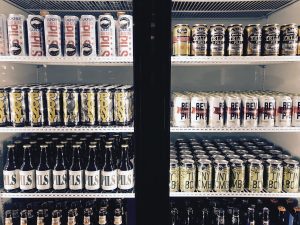 Some of the selections of the craft beers featured in refrigerated cases in the Craft Kave. (Photo by Karie Angell Luc/for Chronicle Media)

Suite 134 is rented for $4,000 to $6,000, depending on game, accommodating 25 people with a catering package and parking, said Jeff Bogacki, senior manager of group sales for Guaranteed Rate Field.

The behind-home-plate location, “is a great view,” he said.

“We’re just trying to improve the fan experience and give them another option here at the ballpark to enjoy with friends and family or business clients,’’ Bogacki said. 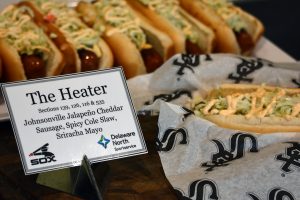 Try “The Heater,” a new offering for the 2017 season. (Photo by Karie Angell Luc/for Chronicle Media)

Typical computer keyboards don’t make it easy to make the “K” backward in “Kave.” But that’s what the logo says.

“The offerings we’re going to give our fans are really going to enhance their experience,” Nigro said.

Burgers sold in the Craft Kave have many names and ingredient variations too. Expect to see the “‘Veeck As In Wreck’ Burger,” which has a double patty, American cheese and stacked onion rings.

With your craft beer, you could try the “King 14” burger which has that double patty, but with Italian sausage, sweet peppers and mozzarella cheese. 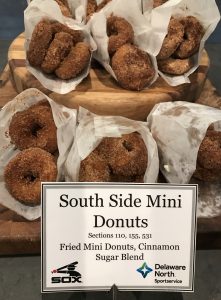 “It just kind of shows you how far craft beer and the food culture in the U.S. have come,” he said.

With 38 breweries and 75 flavors featured in the Craft Kave, the White Sox season afternoon home opener should guarantee to be the start of a flavorful season at Guaranteed Rate Field.

For sure Nigro guarantees it.

“I know they’ll (fans) be surprised when they see it on Monday,” Nigro said.