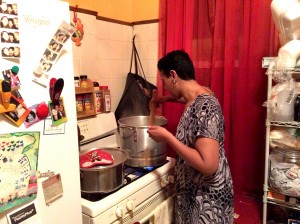 Carolyn Boyd has been dragged, spit at, sworn at, and had food thrown at her.
Just a few weeks ago, she was assaulted, having batteries thrown at her when she ignored a homeless man’s sexual advances.
But still she continues on, going out three nights a week feeding the homeless in viaducts and single-room occupancy buildings throughout the city. The resident of Chicago’s East Garfield Park neighborhood will cook, package and deliver 20 to 45 meals during the winter. That number balloons to 65 to 100 meals in the summer when more homeless leave available shelters.
On a recent night, Boyd made ravioli with Italian sausage

covered in a butternut squash sauce. She packaged the meals in individual containers and put them into two big cloth Aldi bags, loading them into her Nissan, along with cartons of milk and oranges, and gifts for certain homeless individuals.
She started her route at about 8 p.m., hitting the viaducts along Lake Shore Drive at Wilson and Lawrence avenues and Fullerton Parkway and didn’t return home until after 10:30 p.m. In the summer months, when she serves more people, she often won’t climb into bed until 1 a.m.
“I am kind of a chatty Kathy,” Boyd jokes. “I could get done sooner if I didn’t talk so much.”
Boyd does this same routine, every Monday, Wednesday and Friday, on top of working a full-time job in an accounts payable department.
“I love to help people,” Boyd said “It is who I am.”
Boyd was homeless herself at age 16, running away from home because of an abusive mother and an alcoholic father. By 18, she was pregnant with her drug dealer’s child.
“I never forgot where I came from,” Boyd said.
Regardless of the weather, Boyd makes the circuit to feed and help the homeless.
“It can be 20 below and they are still out there,” she said.
She has been on her mission for 16 years, the last three under the umbrella of her charitable organization, Humble Hearts.
On her circuit, she has gifts for two individuals — a man who had just gotten a job as a chef, and the other is a woman whose birthday was the next day. For the woman who loves to read, Boyd brought three paperback books, along with Fannie May candies and other items. It brought a smile to the woman’s face. “Thank you for thinking of me,” she said.
For the man, Tom Murphy, it was a chef’s uniform and a set of cutting knives (donated by Jessica Castaneda, a Humble Hearts supporter).
“She means the world to us,” Murphy said of Boyd and her efforts. “She brings us meals, she talks to us and offers help.”
Alexis Cajigas cares so much about Boyd that he took a battery for her. When an individual was throwing batteries at Boyd a few weeks ago, Cajigas stepped in the way to protect her and wound up getting hit in the head, still having a bump as a battle scar.
“She is an angel in disguise,” said Cajigas, who notes that he has a residence but goes to a nearby viaduct “to keep the homeless people in check” and “to party.”
“She’s been helping us,” he says of Boyd.
Her charity work does not end with meals for the homeless. Boyd, who owns her own building in the East Garfield Park neighborhood, has had homeless women, many of them single moms with babies, stay with her and in her building over the years.
Last spring, she provided 68 low-income girls with dresses for prom, dresses given by Humble Hearts’ backers, some of the dresses with original price tags of $500. Her Humble Hearts organization provides furniture for homeless individuals who get their own housing.
She balks at individuals who refer to her as “amazing.”
“Amazing? Why? Because I cook 65 meals for people?” Boyd bristles. “That is what we are supposed to do; help one another.”
Boyd’s efforts are chronicled on her charity’s Facebook page, Humble Hearts Organization.