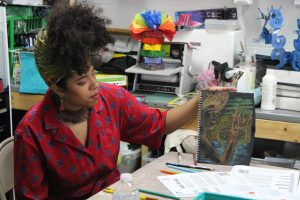 Liz Gomez shares her thought process behind the piece she made for gun violence victims at Advocate Christ Hospital at the July 26 Woke & Winning event. (Photo by Kelli Duncan/for Chronicle Media)

Founder and Director of NYAM, Janice Tisha Samuels, said the campaign allows youths to send personalized postcards to their representatives at the federal, state or local level with just the click of a button. She said this was made possible by a partnership with a new company called Get Loud Now.

“Get Loud Now is a new start-up company, which helps you do a postcard activism campaign from your phone and they’re not just sent digitally, but they actually print them out and send them to a representative for you,” Samuels said.

The postcards have a default message calling on representatives to defend Senate Bill 337 — a bill requiring gun dealers to have licenses — which Gov. Bruce Rauner said he plans to veto, according to a statement he made at a bill signing in March.

Participants can change the message to say whatever they would like and can choose from a selection of postcard art submitted to NYAM by local artists like Liz Gomez. Gomez said she became involved in NYAM because she wanted to use her art to make a change in her community.

“I just felt like I wasn’t doing enough so for me it was really powerful to see my artwork and my personal talents be able to be realized for this movement and for change,” Gomez said.

The campaign is part of NYAM’s Woke & Winning Youth Action Summer Workshop Series, which kicked off with its first session on July 19.

But Samuels said the effects of gun violence go much deeper than numbers and statistics like these. She said she started the workshop series because she saw that a lot of young people were extremely upset by the violence in their neighborhoods, but seemed unsure of how to make a difference.

“I think it’s important that there be a pathway to move from reaction to understanding to then being a part of the system that creates the policy that, at the end of the day, impacts what happens going forward,” Samuels said.

She said she decided to use art as a vehicle for youth involvement because it often helps people express things that they may not have the words for.

“I think there’s a lot of people who don’t always know exactly what to say or they feel shy about what to say,” Samuels said. “They feel deeply about the issue but in terms of communication they’re so much stronger in communicating through art … I was one of those people.”

At the most recent Woke & Winning event on July 26, Lauren Tucker, director of marketing and community relations for Indivisible Chicago, led a discussion on gun violence and gun reform efforts. During the discussion, participants created small art pieces in journals, which will be given to victims of gun violence at Advocate Christ Hospital. 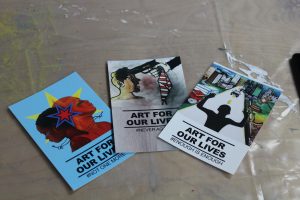 Some of the artwork from the National Youth Art Movement Against Gun Violence Interactive Art Tour has been made into postcards for their postcard activism campaign with Get Loud Now. (Photo by Kelli Duncan/for Chronicle Media)

“Artwork will be going to them so they know that they are loved, that people are thinking of them, that the community wishes the best for them,” Samuels said.

Samuels said she started NYAM in 2016 when she was still new to the area. Once she began to witness how gun violence was affecting young people in the city, she said she was bothered by the fact that no one seemed to be asking youths how they felt on the matter.

“When I looked at news reports, I only saw parents and police officers and principles talking about what was happening to young people, whether they were the victims or the perpetrators, and I was like ‘where are the young people? What do they have to say?’” Samuels said.

Samuels has a background in art and creative writing and is currently working towards a graduate degree in educational technology. So she decided to use her background to try to bring young people into the conversation on gun reform.

“I think that art is a great way of tapping into the truth for people that sometimes get missed and since we are dealing with a marginalized group of people, you know, young people of color in the city, that felt like the right thing to do,” She said.

One of the first campaigns launched by NYAM was their interactive art tour which took place from Aug. 28 to Oct. 1, 2017. Samuels said they put out a citywide call for art, asking young artists to send in works inspired by their experiences with gun violence in Chicago.

Eight works of art were selected and put on billboards in different communities throughout the Northwest and South sides of Chicago.

Samuels said each piece had an augmented reality component set up to work through a cell phone app called Vamonde.

“Augmented reality is a technology that is like virtual reality but it is projected into the real world,” Samuels said. “So when you look at the artwork that was made with National Youth Art Movement through your mobile phone, it will come to life.”

She compared it to the technology used in Pokémon Go, where the cell phone’s camera is still showing the real world but the app allows for other words and images to be superimposed on the screen.

As the pieces on the tour came to life, words of reflection came onto the screen to challenge the viewer to think deeply about the work’s message.

“We just wanted to put it in people’s everyday lives like just walking to work or walking to school but when you see this thing you have to confront what is happening in the city,” Samuels said. 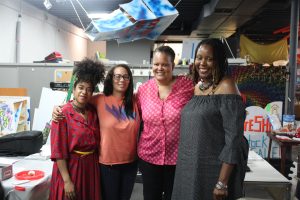 Samuels said the interactive art tours were led by one of the contributing artists who is also a gun violence survivor and he was able to guide people in interacting with and discussing each piece on the tour.

It was during this campaign that Liz Gomez first became involved with NYAM.

“Healing and advocacy was a part of my practice already and so when I checked out this project it was kind of everything that I was looking for,” Gomez said.

Gomez said some of the pieces created for the interactive art tour were later made into posters to be used in the March for Our Lives protest in March 2018. She said that seeing her artwork used in this way was a very powerful experience.

“I think what people really need to understand is that we all need to be involved and it’s about what you have to bring to the table and how we can lift each other up and build upon our passions,” She said.

Gomez is also the education coordinator for The WasteShed where NYAM’s summer workshop series is held.

Gomez said The WasteShed is a creative reuse center for art supplies. This essentially means that they accept donated art materials and office supplies which they then sell at a discounted price to educators, artists and anyone who needs it.

“The WasteShed is one of my main sources of materials and there’s a lot of things that I would never have been able to afford before coming to work here,” Gomez said.

Gomez said they are launching a new campaign on Aug. 19 called the Teacher Resource Project. This project allows teachers and educators to apply for grants to receive a stipend for a semester’s worth of free art materials.

“We already do that a little bit because we have a “free to teachers” section but the Teacher Resource Project will make it so that we can connect a larger amount of teachers to free resources,” Gomez said.

Educators who may be interested in applying can find more information at TheWasteShed.com.