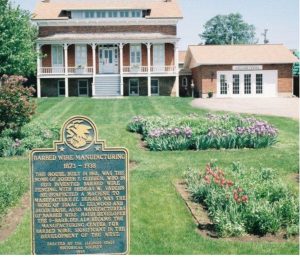 Joseph Glidden received a patent and manufactured what would become the most widely used barbed wire in frontier America in ared brick barn next to his home on West Lincoln Highway in DeKalb. The Taste, a culinary feast, will raise money April 22 to continue to preserve the Glidden homestead.

Jerry Smith captured nearly 50 percent of the vote in a four-candidate field to win election to a four-year term as DeKalb mayor last week.

Area cooks will cook up tasty treats as a way to raise funds for the Joseph F. Glidden Homestead and Historical Center. The center’s ninth annual fundraiser, The Taste, will be held 5:30 to 8 p.m. April 22 at Northern Illinois University’s Barsema Alumni and Visitors Center. Tickets are available by calling (815) 756-7904 or visiting gliddenhomestead.org, First National Bank locations, Glidden Homestead, Sycamore Chamber of Commerce and American Title Guaranty.

The Taste will feature women and men from DeKalb County and beyond, dishing up their favorite recipes, including appetizers, bread, soups, salads, entrées and desserts.

Joseph Glidden was granted a patent in 1874, for what would become the most widely used barbed wire in frontier America. He invented his wire in the red brick barn next to his home. Both structures still stand on West Lincoln Highway in DeKalb, and will benefit from the fundraiser.

Think of a question you would ask someone who is applying to be DeKalb School District 428 superintendent. The School Board wants to know.

In its search for a new superintendent, the board is seeking questions from the community. District 428 recently hired the Illinois Association of School Boards to aid in the search for the replacement for Doug Moeller, who will resign April 30.

Moeller was put on paid administrative leave in September after accusations of sexual harassment, and was replaced by interim Superintendent Brad Hawk.

Six to eight candidates will be vetted and brought to the district to meet with district staff and community members. The board will then interview the top three final candidates. The target employment date for the selected candidate is July 1.

Questions can be submitted to the district at suptinterviewquestions@d428.org.

An upcoming Easter egg hunt is being held for fun and a charitable purpose. Admission to the April 15 egg hunt is free, with the donation of an item for use at Safe Passage, a domestic violence shelter in DeKalb.

Children ages 2-10 are invited to participate in the hunt, which will begin at 10:45 a.m. in the Shelter House of Hopkins Park, 1403 Sycamore Road, DeKalb. Registration is not required.

Before the egg hunt, a Breakfast with the Bunny will be held in the Terrace Room at Hopkins at 9 a.m. The menu, prepared by Fatty’s Catering, will include eggs, pancakes and sausage. Price is $7 per adult and children older than 2. Space for the breakfast is limited, and registration is required. Go to dekalbparkdistrict.com.

The Sycamore Public Library will accept donations of unwanted books and other materials April 15. The public may bring their items to the circulation desk at the library, 103 E. State St., Sycamore, starting at 9 a.m. Items that the library will accept include new and used books and books that need to be recycled. Items donated may be added to the library’s annual book sale, proceeds of which go to support youth and teen programming at the Library. Donations may be tax-deductible. Receipts may be obtained at the circulation desk.

Use of police force Is topic of seminar

The Sycamore Police Department is hosting seminars to educate people on topics including child internet safety, police use of force, IRS scams and trends in illegal drug use. The next seminar, “When Can the Police Use Force?,” will be held at 7 p.m. April 18. This presentation is designed to put the use of police force into context. The capabilities of special operations teams will be discussed. The seminar is free and will take place at the Sycamore Police Department, 535 DeKalb Ave. Reservations are not required, but are requested. Call (815) 865-3435.