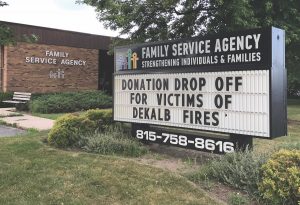 When the lower level room at DeKalb’s Family Service Agency on Sycamore Road opened on the morning of Friday, July 19, it was packed with clothing and shoes, dry food and sundries and even toys and books donated by community members.

By 1 p.m., victims left homeless by recent arson fires in the city had put a considerable dent in the piles on tables and floors.

Tynisha Clegg, the agency’s executive director, said distribution was originally planned for just one day but would continue through the next day, July 19.

Family Service Agency, located at 14 Health Services Drive, will also continue to collect donations and will offer another distribution event in the near future.

The nearly 200 people left homeless by fires on July 9 and 11 are slowly pulling lives back together although few have found new homes or apartments and many are living with friends or relatives or in hotels.

The July 9 fire at a building at 808 Ridge left around 140 people without homes. More than 50 persons were then forced out of apartments on July 11 at a fire at 930 Greenbriar. Both complexes are operated by Hunter DeKalb Properties.

The apartments, north of the Northern Illinois University campus, were condemned after the fires, with access mostly prohibited although some residents at 930 Greenbriar were reported to be returning.

As of July 20  there had been no identification of a suspect or arrest in the two arson events. Authorities, in fact, had to contend with a third apparent arson attempt on July 16.

Firefighters responded to reports of material being lit on the third floor of a building at 930 Greenbriar, the site of the earlier arson attempt. No damage was reported.

For more information on donations or assistance, call Family Service Agency at 815-758-8616 or visit www.fsadekalbcounty.org.