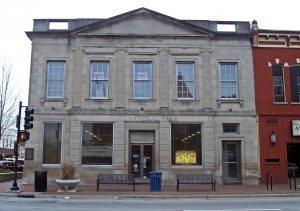 The DeKalb Park District and the City of DeKalb announced that the City Council is interested in relocating “city hall” to the Park District’s downtown property at 164 E. Lincoln Highway.

The former Nehring building is a historic structure that was owned by First National Bank of DeKalb from 1902 to 1966.  The history of the structure can be dated to 1892 when the original owner, DeKalb National Bank, and Sheets & Knodle Hardware occupied the building.

Both the Park Board and the City Council will consider formal steps and a timeline for the transfer of the ownership at their next official meetings. Last week the  Council considered a Resolution to confirm its intent to accept the transfer of the former Nehring building, and the Park Board will take similar action at its regular meeting on June 20.

Executive Director Doll reported that the Park Board is willing to transfer the property at no cost to the City.

Nicklas and Doll cited different reasons for their mutual interest in the property transfer.

“The need for regular and steady foot traffic in the downtown business district is essential if the district is to prosper,” said Nicklas. “There are many routes into DeKalb but DeKalb’s unique identity and history is inextricably wrapped around its central business district and gateway to Northern Illinois University.

“Additionally, we have talked a lot about taking government smaller and in a more friendly direction. The former bank building’s atrium-like layout is set up in a classic customer-friendly manner, “ Nicklas added.

The City’s current city hall on South Fourth Street was built in 1967, houses 24,000 square feet, and was laid out to accommodate more than 80 employees. It is estimated that only 30 City Hall employees would make the move to the former Nehring building.

This large meeting room would accommodate a larger audience than the current Council Chambers. It is accessible by two elevators and offers multiple ADA-compliant restrooms. Nearby off-street parking is also abundant. Nicklas reported: “No other space in City Hall is so seldom used as the Council Chambers. We are delighted with the Library’s interest in this partnership.”

Speaking for the Park Board, President Phil Young stated that the City’s interest will allow the Park District to focus on its mission, which is not renting commercial space.

“The Park District’s mission is about providing recreational and wellness opportunities for our community, not in being landlords. We are glad to have had a part in preserving this beautiful historic building in DeKalb and are excited that it will stay in public hands for residents to continue to enjoy.”

The building at 164 E. Lincoln Highway currently has three tenants: the DeKalb Chamber of Commerce, the DeKalb County Convention and Visitors Bureau, and the DeKalb Area Agricultural Heritage Association.

The tenants have all been consulted and given appropriate notice of the Park District’s intent to terminate their leases. Both the Park District and the City staff will work with each tenant to assist them in locating new accommodations. If approved by both the City Council and the Park Board, the transfer would become effective on or before Jan. 1, 2020.