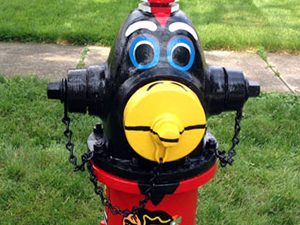 DeKalb’s Paint-A-Plug program, initiated last year by the Citizens’ Community Enhancement Commission as a way to transform fire hydrants throughout DeKalb into works of art, returns for another year.

A standing room only crowd gathered at the DeKalb County Community Foundation on May 29 to receive the funds they raised during Give DeKalb County.

“Give DeKalb County reached new heights in 2019,” said Ben Bingle, director of DCNP. “In only 24 hours, 4,352 donations were made to the 104 participating organizations and funds. A portion of these donations were matched by our 32 Community Partners, resulting in $751,050 raised for the nonprofit community.”

In its sixth year, Give DeKalb County had the most participating nonprofits, the most donations, the highest number of donors, and the largest amount raised during the giving day which was held on May 2, 2019.

A total of 1,901 donors of all ages gave back during the event and donations came in from 43 different states and four countries.

“It is incredible to see people come together through Give DeKalb County,” said Bingle. “This is a special event and we are grateful to all who made it so successful this year.”

The City of DeKalb is seeking renewed interest in its Paint-A-Plug program, initiated last year by the Citizens’ Community Enhancement Commission as a way for community members to transform fire hydrants throughout DeKalb into works of art.

Individuals, groups, or organizations have an opportunity to “adopt” a fire hydrant within the City. There is no cost to adopt a hydrant, but each artist is responsible for providing their own paint and materials.

Paint-A-Plug is open to both residents and non-residents. Current participants include the DeKalb Public Library, Egyptian Theatre, Northern Illinois University, and several local citizens. Local businesses, organizations, students, and faculty from District 428 and NIU are encouraged to participate in this fun and engaging public art project.

Design proposals and applications will be reviewed monthly. Upon approval, artists are permitted to paint hydrants through Nov. 1. Participants are asked to take a photo or two of their finished product and share it on social media using #ProudlyDeKalb.

A 54-year-old Hinckley man was killed in the early hours of Memorial Day when his Volkswagen Jetta crashed for unknown reasons on Main Street in Blackberry Township.

According to a Kane County Sheriff’s Office report, a 2004 Volkswagen Jetta driven by Scott C. Doyens of the 300 block of E. McKinley in Hinckley was traveling west on Main Street just west of IL Route 47 shortly before 1:10 a.m. Monday, May 27 when it went off the road, striking a tree and then rolling over.

Doyens, who was the sole occupant of the vehicle, was transported to Delnor Hospital in Geneva, where he was pronounced deceased.

The cause of the crash remains under investigation by Kane County sheriff’s detectives.

For the safety of all participants and volunteers, the Fox Valley Park District has canceled the 2019 Mid-American Canoe & Kayak Race, which was scheduled for Sunday, June 2.

Additionally, a river flood warning remains in effect for the Fox River until Monday, June 3.

The FVPD monitors water levels annually to ensure safety, and has been forced to cancel three times in the last 16 years, including 2018, due to similar conditions.

“Despite possible drops in levels by Sunday, we can’t assume a safe range will be reached,” said Dan Leahy, the FVPD’s director of marketing and communications. “Two years in a row, we’re as disappointed as the race participants, but safety is paramount to every decision we make.

“We do have a number of experienced, competitive paddlers, but the majority of participants enjoy a more leisurely pace with friends and family, many of whom are children. A swollen, fast river is nothing to mess with.”

A full refund will be issued to all pre-registered participants. Staff are working through phones, email, social media and website to notify all parties, including vendors and volunteers. No action is required on the part of participants.

“Canceling an event, especially one as popular as the Mid-Am, is never a fun exercise,” said Krista Mulready, race director and Prisco Center facility manager at the FVPD. “Hopefully, Mother Nature won’t be so harsh on us next year. We simply had no choice but to cancel this race.”