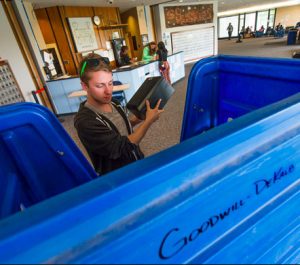 More than 13,000 pounds of items have been diverted from landfills and will end up in the homes of savvy shoppers thanks to a partnership between NIU and Goodwill Industries of Northern Illinois. The Goodwill Move-Out campaign encourages Huskies to donate items.

Public hearing on June 24  on

This report provides information on the use of funds and accomplishments by the City of DeKalb for CDBG Program Year 2018 and the City’s Program Year 25 (April 1, 2018 through March 31, 2019).

Paper copies of the CAPER are available for viewing beginning June 8, 2019 until June 24, 2019 at 5:00 p.m. at the City of DeKalb Community Development Department and the Finance Department at 200 South Fourth Street, DeKalb, Illinois. A copy is also available for review at the DeKalb Public Library, 309 Oak Street, DeKalb, Illinois. The document is posted in electronic form on the City’s website at www.cityofdekalb.com.

All interested persons are encouraged to submit written comments on this report to the City of DeKalb, Community Development Department, Attention: Joanne Rouse, 200 South Fourth Street, DeKalb, Illinois 60115, via regular mail, or via email to Joanne.Rouse@cityofdekalb.com no later than 5:00 p.m. on June 24, 2018 and are invited to appear and be heard at the Public Hearing at the time and place listed above.

For further information, contact the Community Development Department at 815-748-2366

Move out campaign nets 13,000 pounds of items for Goodwill

More than 13,000 pounds of items have been diverted from landfills and will end up in the homes of savvy shoppers thanks to a partnership between NIU and Goodwill Industries of Northern Illinois.

The Goodwill Move-Out campaign encourages Huskies to donate items such as gently-used clothing, linens, decor, kitchen items and working electronics that they no longer want. Large blue donation bins were placed in the lobby of each NIU residence hall and at the apartments in Northern View Community.

“The campaign provides an easy way for students to take home what they need and donate what they no longer want to a worthy cause,” Dawn Montgomery, facilities coordinator, NIU Housing and Residential Services, said.

NIU originally piloted the move-out program for Goodwill in 2012, and since then, Huskies have donated more than 70,000 pounds of items during the Campus Move-Out campaign.

“We are so happy to have NIU as a partner and supporter of Goodwill,” Mary Ann Matus, Goodwill’s Corporate Donations Manager, said.

Goodwill Industries of Northern Illinois is a nonprofit organization that strives to enhance the dignity and quality of life of individuals by helping them reach their full potential through education, skills training and employment. Part retailer and part recycler, Goodwill puts all of their sales revenue back into the communities they serve, which includes 18 counties in Northern Illinois and Southern Wisconsin.

Kane County Health Department officials said they have identified more than 300 people who may have been exposed to the measles virus at six locations in central Kane County between May 20-24.

Health Department officials said the case confirmed on May 28 is no longer infectious, but the department is continuing intensive efforts to ensure the disease is not spread.

Uche Onwuta, Division Director of Disease Prevention, said that as of June 6, the Health Department is actively monitoring about 70 people daily for symptoms.

“If one of these contacts does become infected with measles, the whole process begins again, and each of that secondary case’s contacts must be identified,” she said. “Obviously, limiting the number of people being exposed to a measles case greatly reduces the chance that this virus will spread.”

The person with the confirmed measles diagnosis was at six locations during time periods including the At Home store, Best Buy, Colonial Cafe and Meijer on Randall Road and Northwestern Medicine Regional Medical Group St. Charles offices on Foxfield Road in St. Charles.

Any person who was at the locations and is experiencing symptoms should call their healthcare provider before going to a medical office or emergency department so that special arrangements for evaluation can be made to protect other patients and medical staff from possible infection. 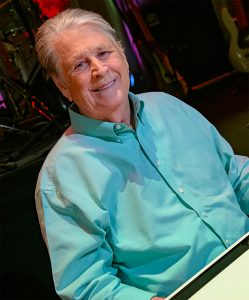 In a recent post on his Facebook page, Wilson said he was feeling “mentally insecure” and planned to rest and recovere..

“In the last year or so I’ve had 3 surgeries on my back,” he wrote. “The surgeries were successful and I’m physically stronger than i’ve been in a long time. However, after my last surgery I started feeling strange and it’s been pretty scary for awhile. I was not feeling like myself.”

All tickets will be refunded in full to the purchaser’s original form of payment.

If paid with cash or gift card, a check will be mailed. If paid with an account credit, the credit will be reissued to the user’s account.

Refunds were already being processe. Credits will post immediately, and refund checks will mail within 1-2 weeks.