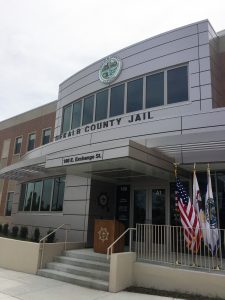 Dedicating a new jail may not necessarily be cause for celebration, but DeKalb County officials certainly feel satisfaction with the successful completion of a two-year, $36 million jail expansion project.

“Jails typically represent a personal failure for individuals, sometimes a failure by society,” said County Board chairman Mark Pietrowski Jr. at last Thursday’s ribbon-cutting in Sycamore. “But what I will say is that this facility was absolutely needed.”

The ceremony, held outside the jail’s Exchange St. entrance, drew a crowd of sheriff’s and county personnel, other public officials and members of the general public who were then offered building tours.

The new jail, set to house inmates sometime next month, will ease longtime overcrowding at the jail’s  current Public Safety Building, built in 1980 and how holding more than 80 persons. The new wing will initially offer addition room for 57 men.

There’s also empty space roughed into the new building that’s designed to eventually be converted into more cells. The complex could ultimately handle a population of up to 200, including continued Public Safety Building use.

Meals can be handled on site in a kitchen area with ample preparation and storage space. There’s also professional grade laundry equipment.

The main cellblock contains a small recreation area and a library. Nearby are rooms for group counseling and one-on-one meetings. Guards will be positioned on a central, elevated platform with all cells within view, plus video monitors and sensors associated with each cell.

Cells are simple, featuring a desk and stool, sink, toilet and a concrete sleeping pad. The jail provides a mattress.

“This was a very long time coming,” Pietrowski said. “This is something the Sheriff’s office and staff have wanted for a long time.” 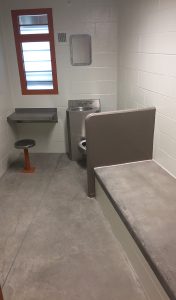 Cells inside the expanded DeKalb County Jail are simple, featuring a desk and stool, sink, toilet and a concrete sleeping pad. The jail provides a mattress. (Photo by Jack McCarthy / Chronicle Media)

The expansion came in on-time and on budget.

“We’re celebrating the fulfillment of a responsibility and that responsibility is to have a safe, secure and humane county jail,” Sheriff Roger Scott said. “It is (also) a safer and much more improved work environment for the deputies who indeed are the heartbeat of every jail.”