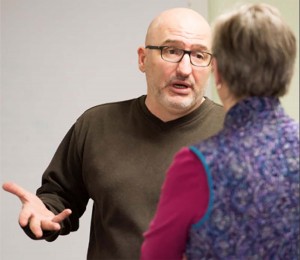 People of all ages, races, ethnicities and faiths join together for an evening of food, fellowship and frank discussion during Beloved Community dinners.

While the term “Beloved Community” was first used by philosopher Josiah Royce in the early 20th century, it was Dr. Martin Luther King Jr.’s interpretation of Beloved Community that “captured the imagination of people of goodwill all over the world.”

Since March 2015, concerned residents of DeKalb and members of the Northern Illinois University community have gathered each month to take part in Beloved Community dinners.

People of all ages, races, ethnicities and faiths join together for an evening of food, fellowship and frank discussion during Beloved Community dinners.

“What is community, and what do we think of when we hear the word community?” asked N’Jema McIntyre, an NIU senior who has been attending Beloved Community dinners for the past year. “Do you know your neighbor? We have thought-provoking questions, focus on community issues and talk about what is going on in DeKalb.”

According to the King Center, King’s Beloved Community “is a global vision, in which all people can share in the wealth of the earth. Racism and all forms of discrimination, bigotry and prejudice will be replaced by an all-inclusive spirit of sisterhood and brotherhood.”

And while conflict is an inevitable part of life, King believed that “conflicts should be resolved peacefully and adversaries could be reconciled through a mutual, determined commitment to nonviolence, cooperating together in a spirit of friendship and goodwill.”

McIntyre said about 30 to 90 people attend the dinners — the next is scheduled for Sunday, March 20 — and while the location and the topics discussed change each month, one thing remains consistent at every Beloved Community dinner.

“The premise is to break bread with the community,” McIntyre said. “It is not faith-based; it is community-based. It’s an opportunity for us to have open conversations and honest dialogue with each other.”

“There is something to be said about people gathering to share a meal in search of peace and love, regardless of a person’s origin,” Phillips said. “This is a unique group of folks that are invested heart and soul in the DeKalb community.”

“I was invited to the Beloved Community along with DeKalb Police chief Gene Lowery to discuss our collaborative policing efforts and our individual policing philosophy,” Phillips said. “I wasn’t sure what to expect, but after the dinner I realized that there was a real positive vibe in the room.”

Phillips said while there were some tough topics discussed – tension among police in the minority community, the perceptions of crime, race and poverty – they were pertinent topics that produced meaningful dialogue.

“There was real-world dialogue about some tough topics in today’s society,” the chief said. “But, it was a place of mutual respect regardless of a person’s beliefs and ideas, and more importantly, a place where I felt welcome.”

After taking part in the monthly event on the professional side, Phillips realized the benefit of being part of the group as a community member.

“I went home and talked to my wife about the experience, and shared with her the discussions about race, poverty and crime,” Phillips said. “I realized then that something about the Beloved Community struck a chord inside of me. I wanted to go back, but this time as a participant.”

And he did, bringing his wife, Nan, and their two children.

“We have been to several dinners, and we plan on attending more,” Phillips said. “I enjoy having a place in the community where love is palpable and everyone is welcome.”

“Beloved Community helps bridge the gap between the DeKalb community population and the African-American and Latino student communities,” Bramlett said. “It also provides a forum to address issues with the DeKalb and NIU police forces as they interact with all students.”

Bramlett said the goal of Beloved Community is for participants gain a better understanding of people that they might not interact with on a daily basis.

“I think the biggest gain for anyone that attends is the experience of community; good people of all ages, races, backgrounds, coming together for something really special,” Phillips said. “Reflecting on the experience, I am grateful to now know many of the good people who come to the Beloved Community.”

And don’t forget the food.

“I have to admit, I’m a food lover too,” Phillips said. “I get excited about the variety of dishes, but what makes it all the more delicious is the people enjoying the meal with you. I recommend that anyone who wants to enjoy a good meal with great people should give Beloved Community a try.”