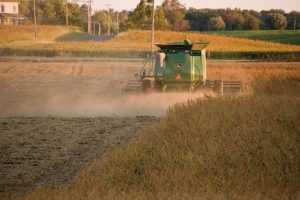 Recent rainy weather has replaced a long period of dry conditions, leaving farmers in the region playing a waiting game on when to harvest the rest of their crops.

A weekend visit home by Iowa State University student Joseph White to help with the harvest on his father and grandfather’s farm was dampened a bit by the recent gloomy, wet weather.

“On Monday, he got to help out a little bit.  But we can’t coordinate the weather with his trips home,” said his dad, Jami White.

White, who farms about 1,500 acres across Kane and parts of DeKalb counties, said that he spent the last several rainy days making sure all of his equipment is up and operational so that “when the bell rings” they can begin the harvest.

“In terms of both crop development and harvesting, we are several weeks behind where we have been in the last several years, “White said.

“We tried to harvest a small amount of corn and it was wetter than what I expected,” he added.

Corn can be harvested when it is wetter but here is an additional cost involved in drying it.

“Because of the wet spring, planting occurred in different windows,” White said.

When the crops were planted earlier last spring, the growth was slowed due to the cool, wet spring weather.

In addition, the dryness and drought adversely impacted the plants’ ability to mature.

“All things considered, the crops are in better shape than we thought they would be based on the weather this spring, when they were struggling to come out of the ground,” he added.

Harvesting soybeans is predicated by the weather.

“They want sunny, warm, dry days to harvest,” he said.

“We are behind in the harvest,” said Mark Tuttle, DeKalb County Farm Bureau President.  “However, we started out behind.  We had a wet April and May, so crops got planted two to four weeks later than normal.”

The cooler than normal summer also has led to the delayed harvest, he added.

The dry weather was followed by a few days of wet weather, but Tuttle said, “We are behind because of the weather we have had all year long. … It is time to get started.”

Tuttle, who farms corn and soybeans, said most farmers in the area like to be wrapped up with their harvest before Thanksgiving.

“We are moving machinery around as it gets dark earlier which brings up safety issues,” he said. “That is another key to getting the harvest completed,” Tuttle said.

Local farmers who grow pumpkins and farm to market crops have also been impacted by the weather, he added.

“This has been tough on them too,” Tuttle said.   “A lot of the harvesting of those crops is done by hand.  So they are out there trudging through the conditions in their boots.”

Up until recently, Dan Reedy with the Kendall County Farm Bureau said, “We haven’t had a good rain since the first week of August.”

The lack of rain has had an effect on the harvest as well as the number of bushels of soy beans that have been harvested.

“The rain has been very welcomed,” Reedy said.

The lack of rain also has brought about issues with dust, he added.

Beans, which are typically harvested earlier than corn, have been coming out of the field pretty dry, he said.

However, many Kendall County farmers are still waiting to harvest the corn.

Corn farmers are hoping to be wrapped up by the middle of November, Reedy added. “However, a lot will depend on the weather.”

Ann Marie Cain, Manager of the Winnebago-Boone Farm Bureau shared, “My group is all over the board.”

Some have not started harvest yet, she added.

Other farmers are ranging from 40% to finished harvesting soybeans.

“I don’t believe there are many out there that have started on corn yet,” Cain said.

—- Harvests start to come in despite late start to season, recent rains —