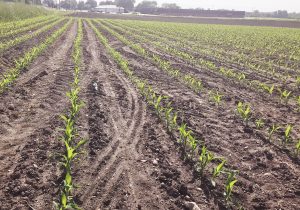 By late June corn crops are usually off to a robust start but in this growing season the plants are barely inches tall. (DeKalb Journal photo by Jack McCarthy)

This spring has featured one of the worst planting seasons in memory for farmers around Sycamore and throughout DeKalb County.

“It’s been terrible,” said Mark Tuttle, president of the Sycamore-based DeKalb County Farm Bureau. “I never had a tractor in the field the entire month of May. We had a couple dates in April to work some ground, but we never got back in after that because it rained 15 inches up until June 7.

“That was my first day in the field,” added Tuttle, who grows feeder corn, soybeans and wheat, along with some sweet corn under contract for Del Monte in Mendota.

Farmers are facing historic planting issues, prompting one area producer to compare the situation with that of the 1930s Dust Bowl, which prevented thousands of farmers from planting their crops and forced them from their land.

The Dust Bowl, which occurred after a prolonged, historic drought and forced thousands of producers to flee the industry, led to the establishment of the federal crop insurance program.

If not for that insurance program, tens of thousands of U.S. farmers, including Tuttle, would likely go out of business before the next growing season.

Tuttle described the effects this so-far disastrous growing season have had on his family, farming operation and his peers. It’s ironically been caused by flooding and record amounts of rainfall following a late snowpack melt on the upper Mississippi River.

During a six-day period beginning June 7, Tuttle planted a partial crop of corn on the workable land he had. One farm Tuttle works did not see any corn planted at all this year.

“Probably 20 to 25 percent of my corn acres are going into prevent plant,” he said. “We still have soybeans to plant, though we got a lot of them in. We still have about 100 acres of beans to put in the ground yet, and we have a lot of hay to make,” he said. “It’s been miserable at best.”

How miserable? Tuttle estimates that in southern DeKalb County, where he farms, thousands of acres of corn will go unplanted– perhaps as many as 10,000 acres.

“Nationwide, I am going to say that over 10 million of acres of corn and beans will not be planted,” Tuttle said.

Though DeKalb County possesses some of North America’s richest and flattest soils, farmers will not come close to matching last year’s harvest figures.“I don’t think there is any question that this has been the most challenging year for planting,” said Millburg, who has been active with the DCFB for 29 years, serving the past 16 as bureau manager. “It’s been a challenging, wet, cold spring. Some farmers were lucky to get some corn in during early spring, but much of that is yellowed and of a variety of heights.”

Millburg and the DCFB has offered a series of Skype discussions about how to claim prevented planting coverage, and how to file for a second round of USDA Market Facilitation Program payments, which are expected to be announced in the coming weeks.

“I think farmers are really relying heavily on their insurance adjusters and advisers to help guide them in their decision making. There is a lot of confusion out there right now and a lot of decisions to be made,” Millburg said. “These are hard decisions when you are worried about your livelihood and just trying to get a crop in the ground.”

There will be a severe impact throughout the industry, including suppliers, equipment dealers and others in the agriculture industry from the fallout of this year’s crop disaster, Millburg predicted.

“I’ve never seen the looks on farmers’ faces from this before. If it wasn’t for the crop insurance program, a lot of farmers wouldn’t be on their land next year. The only thing I can compare it to is the Dust Bowl, when farmers couldn’t get a crop in for a couple of years and they actually left the land,” Tuttle said.

“Nobody here has seen this,” he added. “I had breakfast with a farmer in his 90s and he was asking me what it is I am going to do. I asked him ‘what did you guys do,’ and he told me he had never not been able to get a corn crop in by the end of May. I don’t think this country will be able to produce enough corn this year to meet the demand for what we need.”