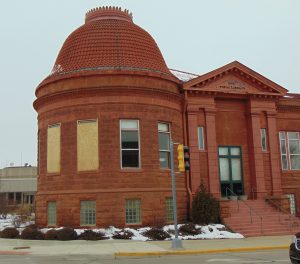 If the Sycamore Library Board needed any confirmation about replacing aging windows in the Carnegie section of the library building; the board got a strong hint after a Jan. 9 meeting when two windows began flapping in 45-mile-per-hour wind gusts.

Library director Monica Dombrowski was called to the area by adult services manager, Kim Halsey.  The compromised windows were removed and boarded up that night and the scary situation was finally resolved around midnight.

But the irony of this occurrence didn’t come as that much of a surprise to Dombrowski.

The original portion of the Sycamore Public Library was built in 1905 with partial funding from the Carnegie Foundation.

Today’s fundraising to replace the Carnegie windows has come from local sources, resulting in more than $25,000 so far.

“This is a historic building and it’s important to the community as a landmark on the corner of State and Main Streets in downtown Sycamore,” Dombrowski said.  “The library looks out on the town square and it’s really the crown jewel of Sycamore.”

Along with the existing window fund, Dombrowski has been working with Sycamore city officials to secure a state grant to offset the window replacement costs.

“Our state representative of the 70th District, Jeff Keicher, has indicated that the state grant we have applied for could total $75,000 toward the window project,” she said.  “We have completed all the paperwork for the grant and I’ve been told that our chances of receiving the grant look promising.”

The estimate for replacing the windows could cost between $80,000 and $105,000. If the Sycamore Public Library receives the state grant, work on the windows would need to be completed by June 30.

As a proactive approach to help the window project come to fruition, Dombrowski has started a Coins for Carnegie Drive so patrons can donate funds when visiting the library.

Additionally, an all-you-can-eat-BBQ dinner fundraiser has been planned by Friends of the Library.

The dinner will take place on Fri., March 1 from 4:00 to 8:00 p.m. at the VFW, 121 S. California St., with all proceeds going to the window replacement fund and other capital improvement projects for the Carnegie section of the library building.

“The response and the support from the community has been tremendous,” Dombrowski said.  “Third ward Alderman Nancy Copple has recently joined our library board and we are very excited to have her help in our fundraising efforts.

“We like to preserve the library’s historic value,” Dombrowski added.  “It’s the building, but also what we offer inside of the building that makes us a treasure to the community.”