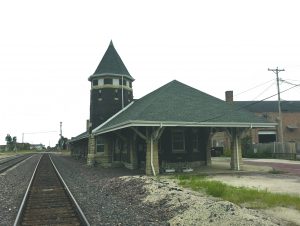 It’s been almost 50 years since a passenger train last stopped in DeKalb.

It wasn’t for the lack of trying. When Metra first began planning to extend its the Union Pacific West line, an extension all the way to DeKalb was considered, but it ultimately never went past Elburn.

But that hasn’t stopped residents from pushing service to and from DeKalb. Most recently, in February 2017, DeKalb resident Jane Rogers launched a petition calling for the extension, As of Sept. 13, it had 1,516 signatures.

While the Chicago area’s 2040 Long-Range Transportation Plan – the most recently completed plan at press time – describes the extension as a long-range goal, DeKalb city officials declined to comment on how they feel about the idea.

They did indicate that city is currently looking at the more frequent shuttle service to Elburn station. But they won’t have any specifics as to what this service would look like until they finish the study looking at how much demand there and when the riders would actually use it.

The Union Pacific West Metra Line traces its origins to Galena & Chicago Union Railroad, the very first railroad in the Chicago area. While the exact alignment changed somewhat over the past 168 years, the section between downtown Chicago and the city of West Chicago mostly followed the same path. The company merged with Chicago & North Western Railway company in 1861.

Today, the tracks are owned by Union Pacific Railroad, which bought Chicago & North Western in 1995. The railroad owns the tracks and operates the commuter trains under contract with Metra.

The line never went west of Geneva until 2006, when it was extended to LaFox and Elburn.

DeKalb never had a commuter train service, but, until 1971, it was served by Chicago & North Western’s long-distance “Kate Shelley 400” train, which ran between Chicago and Clinton, Iowa. It  was one of the many routes that was discontinued when Amtrak took over most inter-city passenger train service in United States.

The extension would use the same tracks Kate Shelley used, passing through the Village of Maple Park and the town of Cortland along the way. The original Chicago & North Western Railroad depot is still standing in downtown DeKalb, but it is currently being used as local Union Pacific offices.

In June 24, 2015, DeKalb Sycamore Area Transportation Study (DSATS), an organization responsible for transportation planning in the area, released its 2040 Long Range Transportation Plan, which looked at the current state of region’s transportation and set the priorities for the next 25 years.

The plan listed the Metra extension to DeKalb as one of long-term goals. But in Appendix D, the document also lays out the potential obstacles.

First, DeKalb County isn’t part of the Regional Transportation Authority, the umbrella agency that provides oversight over Metra. The commuter transit agency can’t spend any funds it gets from the RTA on building and operating service outside the RTA service area.

According to a statement provided to the Chronicle by RTA spokesperson Susan Masell, a county or other “geographic territory” can join RTA, but it’s a multi-step process.

First, the RTA Board of Directors must pass an ordinance “listing certain conditions of entry into the RTA region.” Then, the county board or the government of the area wishing to join must approve that ordinance. Then, the annexation must be approved by the majority of the area’s voters.

Then, there’s one final step.

“If there was a service and taxation agreement associated with the annexation (i.e. the new territory would obtain transit service in exchange for application of the RTA tax within the boundaries of the service area or county), there would need to be a change to the RTA Act to allow for taxation within the new territory,” the statement said.

Metra spokesperson Michael Gillis previously told the Chronicle that the lack of RTA membership wouldn’t necessarily be a deal-breaker – but the municipalities outside the service area would have to figure out a way to cover the costs that would normally come from RTA funds. He also indicated that Metra is currently focused on maintaining the system it already has.

Appendix D also notes that the tracks that the extension would be built on see heavy freight usage. Building a third track would address the problem, but that would require DeKalb to figure out a way to not only fund the track construction, but the cost of acquiring the necessary right-of-way. The appendix estimated that the overall cost would be “at least $125 million.”

Marcus Cox, the Transit Manager at the City of DeKalb, declined to comment on how the city feels about the extension,  saying only that his employer is interested in figuring out the best way to let the residents travel between DeKalb and Chicago.

Northern Illinois University operates one of the two transit systems serving DeKalb-Sycamore area – the Huskie Line.  Joe King, Associate Director of Institutional Communications at NIU, told the Chronicle that, while the university has no official position on the Metra extension, he knew that it was something that many students wanted.

Today, there are two ways to travel between DeKalb and Chicago by public transit.

But the shuttle has many limitations. While its schedules work for students and residents wishing to visit Chicago and the western suburbs for a weekend, they make same-day round trips to Chicago impossible.

Furthermore, according to to Huskie Line’s website, the tickets for the route must be purchased at NIU Homes Student Center – so the service is inaccessible to anyone who may be interested in, for example, visiting DeKalb for a weekend.

King said that the schedule was geared toward serving students wishing to visit Chicago and its western suburbs over the weekend, with the schedules designed provide service “the times of peak demand.” He said that, to the best of his knowledge, the shuttle has been operating since “at least 2010,” and it hasn’t seen any significant changes since then.

V-Line, the bus system operated by the City of Valparaiso, Ind. has a service that fills a similar niche – connecting a college campus in a city with no passenger rail service of its own to a commuter train station several towns over  – but it offers considerably more flexibility.

The Orange Route operates on Fridays, Saturdays and Sundays, providing a transit link between South Shore Line’s Dune Park station and Valparaiso University campus, allowing residents to take the train to Chicago, South Bend and other destinations in northwest Indiana.  Like Elburn Shuttle, Orange Route operates in the afternoons on Fridays, but it starts and ends earlier.  On weekends, it runs from early morning to late evening.  In both cases, the schedule allows riders to make day trips to most destinations on the South Shore Line.

Orange Line riders can pay fares by cash no matter where they get on. And while Elburn Shuttle has higher fares than the other Huskie Line routes, charging  $6.25 for NIU students and $10 for other passengers,

Orange Route’s fares are the same as the rest of the V-Line – free for Valparaiso University students and $1 for the general public.

For NIU students taking the Elburn Shuttle and the Union Pacific West Line between the campus and Chicago, the trip costs a total of $15.25 in each direction – only slightly cheaper than taking Greyhound bus, while for non-students, the total fare would add up to $19.

By contrast, a total cost of a trip for a Valparaiso University students between Valparaiso and downtown Chicago would be $9.00, while non-students would pay $10. As of July 1, 2018, the train portions of both trips cost exactly the same – $9.

Another of 2040 Long Term Transportation Plan’s long-term transit goals was a “daily shuttle service” to Elburn station.  Cox told the Chronicle that the city wants to launch a more frequent service between the DeKalb and the station “in the near future,” but he took pains to emphasize that he didn’t have any specifics yet – including how frequently it would actually run.

Before DeKalb launches anything, Cox explained, it wanted to study what the demand is, what the residents will be using the shuttle for and how often they would ride it. He said that the last thing the city wanted was to launch a service, only to have the buses run empty.

“We need to analyze the data,” Cox said.  We know that people want the shuttle, but we want to iron out the [particulars].”

He said that, as of Sept. 11, he didn’t have a timeline for when the service would launch.