A new tourist attraction in northwest suburban Woodstock is a tribute both to the town and the talents of some Northern Illinois University alumni.

A 1971 graduate, Michael Stanard designed a mural, while 1993 graduate Bobby Jo Scribner created a sculpture for the Woodstock on Film and on the Stage mural and sculpture garden near Classic Cinemas Woodstock Theatre.

Another NIU alumnus, Katie Willcockson, who graduated in 2016 with a degree in Media Studies, produced two documentary-style videos promoting the effort.
;

The 118-foot-long painted mural runs alongside a pedway on Main Street. It depicts celebrated figures with ties to Woodstock, including Dick Tracy and his creator Chester Gould, and characters from the 1993 movie “Groundhog Day” largely filmed in Woodstock, starring Bill Murray.

A longtime Woodstock resident, Scribner donated the statue to the town.

“There was such a deep connection with this town and Orson Welles that I thought there should be a sculpture of him here,” said Scribner, a professional sculptor and instructor at the American Academy of Art in Chicago. “I think it’s going to fit there quite well.” 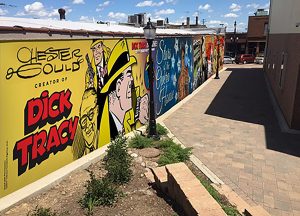 Scribner, who earned his Master of Fine Arts degree from NIU, created the sculpture several years ago after meeting Oja Kodar, Welles’ longtime companion. Kodar had visited Woodstock–where Welles attended the former Todd School for Boys during his formative years–as a guest during an Orson Welles Festival in 2015, the year in which Welles would have been 100 years old.

Welles performed on the Woodstock Opera House stage before embarking on a successful career in radio, theater and film. He wrote, directed and starred in 1941’s “Citizen Kane,” recognized as one of the greatest films of all time.

An artist herself, Kodar had created a sculpture of Welles in Croatia, where she lives.

“She said to me, ‘Orson would be 100 years old and there’s not even a sculpture of him in his own country,’” Scribner remembered. “That sort of affected me. I immediately said, ‘I’ll do one.’ And she said, ‘You should.’ She flew back to Croatia, and I never hear from her. I did it. I built the thing. I always said I would.”

Three-fourth the size of Welles, the statue was cast in bronze and installed in the Woodstock sculpture garden last week. It depicts a middle-aged Welles seated, holding a cigar. Scribner started it in 2015, working on it off and on for a couple years by looking at photographs of Welles.

He opted for a younger Welles, rather than Welles in his old age.

The sculpture already was done when Scribner received the call from those behind the project asking for advice on a sculpture garden. Scribner told them they could have his sculpture. “It was meant to be,” he said. 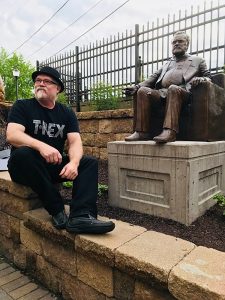 Bobby Jo Scribner and his sculpture of Orson Welles

Community fundraising raised the $10,000 needed to cast the sculpture in bronze, while another roughly $68,000 in donations went toward the mural, a kiosk and a large carved wooden groundhog by woodcrafter Michael Bihlmaier.

The entire project was a “labor of love” for Stanard, the owner of One Zero Charlie, a branding, design and advertising business in Woodstock.

“I just thought somebody had to do it,” said Stanard, who came up with the mural design and spearheaded the effort after former Woodstock City Councilman R.B. Thompson suggested the idea. Rockford muralist Mark Adamany painted the mural.