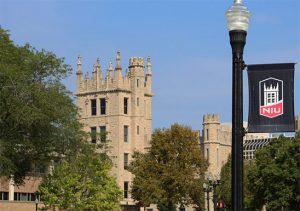 After months of dire predictions nationwide for fall college attendance, Northern Illinois University announced today that total enrollment is up for fall 2020.

Students are back on campus at NIU, where 8 percent growth in the freshman class helped the university post enrollment gains this fall.

According to the official census on the 10th day of attendance, total enrollment for fall 2020 climbed to 16,769, up 160 students (1 percent) from 2019. Driving that growth is a freshman class of 2,047 (up 8 percent), and a 6-percentage-point improvement in retention of first-year students.

“NIU increased total enrollment during this challenging and dynamic time by attracting a freshman class that is strong in number, talent and diversity, and by welcoming back continuing undergraduate, graduate and law students who appreciate the quality and affordability of our educational experience,” said NIU President Dr. Lisa C. Freeman. “It is deeply gratifying that students were able to look beyond the uncertainty of these last several months and recognize that NIU offers a tremendous combination of access and excellence.”

“Since we approved the plan in January 2019, we have dramatically changed how we approach potential students,” said Sol Jensen, NIU vice president for Enrollment Management, Marketing and Communications. “We are identifying potential Huskies earlier in their high school careers, communicating with them more frequently and more strategically, and raising our profile through more aggressive and targeted advertising. It is satisfying to see those efforts already yielding results.”

Improved undergraduate retention is another key facet of NIU’s Strategic Enrollment Management plan, and this fall’s numbers reflect significant progress in that regard. Overall retention of first-year students climbed 6 percentage points (to 78 percent). That was driven by significant growth in the retention rates for students of color, as African American, Latinx and Asian students were all up by at least 10 percentage points from a year ago.

Those improvements are attributed to NIU’s commitment to removing barriers to college graduation for all students, including improvements in how the university identifies and assists students struggling to make the adjustment to college, said Executive Vice President and Provost Beth Ingram. “The approaches we’ve developed and implemented — before and during COVID-19 — to support our first-year students enabled them to thrive and re-enroll at NIU,” she said. “Just as importantly, these measures should also help us maintain the improvements in retention and student success going forward.”

One area where numbers slipped was among new transfer students, which declined to 1,504 (a decrease of 7 percent). The drop reflects continued declines in the region’s community college population.

Looking at the characteristics of the incoming class, NIU continued to have success recruiting students of color, particularly Black students. While colleges and universities across the country, including Illinois, have seen declining enrollment rates for Black students, NIU recorded its fifth straight year of increased African American enrollment in the freshman class. This year, 35 percent of entering freshmen are Black (up 2 percentage points), the highest that figure has been in university history. Latinx enrollment also grew, accounting for 23 percent of the incoming class (up 3 percentage points).

This year’s incoming class also boasts a strong academic profile. The average high school GPA among new freshmen was 3.32 — the second highest it has been in 11 years — and the percentage of applicants with GPAs of 3.5 or better grew by 16 percent.

Some of that increase can likely be attributed to the university’s new Huskie Pledge. Implemented this past year, the program guarantees that all tuition and fees will be covered by grants and scholarships for any Illinois students with high school GPAs of 3.0 or better and whose families have incomes of $75,000 or less.

In all,  Freeman said, this year’s enrollment numbers are cause for great optimism and pride.

“This is one of the most diverse and talented incoming classes that we have ever recruited, and we hope that this sets the trend for the years ahead,” she said.