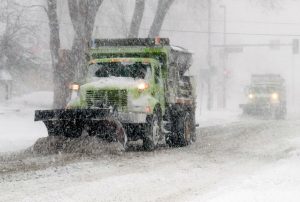 Could there be less back-breaking snow shoveling in our future? A Northern Illinois University study finds climate change could reduce U.S. snowstorms. (Photo courtesy of IDOT)

Under an unabated greenhouse gas emissions scenario, the study projects 28% fewer snowstorms on average per year over central and eastern portions of North America by the century’s last decade, with one-third the amount of snow or frozen precipitation and a 38% loss in average snowstorm size.

“If we do little to mitigate climate change, the winter season will lose much of its punch in the future,” said Walker Ashley, an NIU professor of meteorology and lead author of the study, published on May 25 in Nature Climate Change.

“The snow season will start later and end earlier,” Ashley said. “Generally, what we consider an abnormally mild winter now, in terms of the number and intensity of snowstorms, will be the harshest of winters late this century. There will be fewer snowstorms, less overall precipitation that falls as snow and almost a complete removal of snow events in the southern tier of the United States.”

Using the NCAR data, the researchers tracked snowstorms for 12 seasons in the early part of this century, establishing a control sample that was found to be representative of actual observations. They then tracked snowstorms to see to how those winter events would change in a climate that was warmer by about 5 degrees Celsius (9 degrees Fahrenheit). That temperature increase is predicted for the late 21st century by averaging 19 leading climate models in an upper-limit greenhouse gas emissions scenario, according to NCAR.

The study is believed to be the first to objectively identify and track individual snowstorm projections of the distant future—from minor snow accumulations, to average winter storms, to crippling blizzards.

In total, the researchers identified and tracked nearly 2,200 snowstorms across central and eastern North America over 24 years (past and future) at a grid spacing of about four kilometers (2.5 miles). These “high resolution” simulations allowed the researchers to examine the snowstorms in much greater detail than had been previously done.

Significant decreases were found in the frequency and size of snowstorms in the global-warming simulation, including those events that produce the most extreme snowfall accumulations.

Under current climate warming trends, the likelihood will be reduced for early season snowstorms like this one in mid-November of 2015 in DeKalb, Illinois. Credit: Northern Illinois University

The most notable snowfall changes would occur during the “shoulder-seasons,” which bookend the core winter months. Snowstorm counts for October, November and April were projected to decrease by 83.5 percent, 48.4 percent and 60.5 percent, respectively.

The scientists also found that much of the northern tier of the United States—in regions that historically have experienced frequent heavy winter snows—would see overall snowstorm reductions of 30% to 50%. Notably, the high emissions scenario used for this work suggests that snowstorms could become a thing of the past in the American South.

“Major cities such as Chicago, New York and Boston would continue to see snowstorms, but when looking over long climatological time periods, the total number of snowstorms is projected to decrease, especially in portions of the early and late winter,” Gensini said. “Significant winters of the past like the ones we saw in the late 1970s would still be possible as we go forward in a future climate, but their likelihood would be reduced.”

Predicting the impact of climate change on future snowstorms is key for many aspects of life and the economy. Substantial reductions in annual snowfall could have far-reaching implications on everything from snow-removal and energy budgets to water resources and plant and animal life.

“There could be benefits in some areas, such as for air and road transportation systems,” Ashley said. “But there also could be serious negative consequences, especially for freshwater resource-dependent industries such as agriculture, recreation, refining, manufacturing, power generation and river and lake transport.

“While this study doesn’t’t dive into the topic, there are also climate feedbacks to consider,” he added. “Snow cover reflects solar radiation and helps cool the environment. So annual reductions in snowfall and snow cover could amplify potential warming.”

Ashley notes that the study does have limitations. Given data restraints, the researchers only looked at a scenario of unabated greenhouse gas emissions, assessed relatively short periods of time and examined only end-of-the-century projected changes.

This research was supported by National Science Foundation.