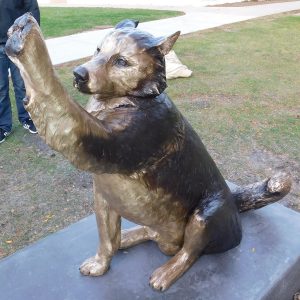 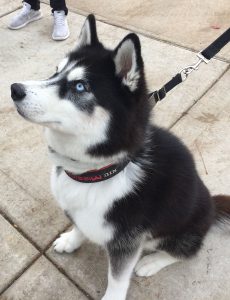 Mission, the successor to Diesel as NIU mascot, sits attentively awaiting a pet from a visitor outside Huskie Stadium last Thursday. (Chronicle photo by Jack McCarthy)

Diesel, who patrolled NIU football sidelines for nine years, delivered iconic high fives to cheerleaders and was immortalized during a 2013 nationally televised football game on ESPN.

The high fives will continue thanks to a statue that features Diesel forever frozen in a pose with his left paw raised.

Diesel, owned and handled by NIU alumnus Tom Bonnevier, retired after the 2013 season and died in 2015 from lymphoma. Shortly afterwards a group of NIU alumni sought a way to create a lasting memorial.

“The idea started from a fan forum suggestion from somebody named NIU Drew,” said attorney Rick Radek, an NIU alumni who helped organize the memorial effort. “We don’t know who NIU Drew is, but he’s the one responsible for getting the ball rolling. 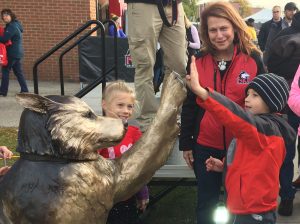 “The idea to have a statue to honor Diesel sounded like a something that was something really worthwhile doing … and add to the tradition of NIU football and athletics.”

Renee Bemis, a Chicago-area sculptor of animal subjects, was commissioned to create the figure.

Tarp covering the statue was removed during a ceremony prior to kickoff of Northern Illinois’ game against Eastern Michigan. A steady stream admirers — from kids to older NIU fans — promptly came up to deliver their own high-fives, take selfies or pose for more formal portraits.

The 400-pound statue sits securely on a raised platform located outside the northwest entrance to Huskie Stadium. The names of Diesel’s successors — including Mission, the current mascot — will be included upon their retirements. 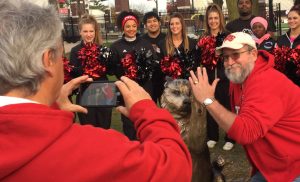 A Huskies fan poses for a cellphone photo as he delivers a high five to Diesel after last Thursday’s unveiling of a statue honoring the longtime NIU mascot. (Chronicle photo by Jack McCarthy)

The statue cost $25,000 and supporters around $3,000 is still needed to complete the project. Donations are still being accepted at https://www.gofundme.com/uqs9qmrn or via the First National Bank in DeKalb and the  non-profit Diesel Memorial Project.

Donations are tax-deductible and money raised beyond $3,000 will go to a fund to maintain the statue.