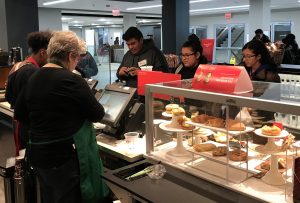 A new Starbucks coffee shop on the lower level of the renovated Holmes Student Center is already a hit with students and customers.

A long overdue renovation has transformed dingy and outdated portions of Northern Illinois University’s Holmes Student Center from a place to pass through into a destination in its own right.

The results of a $20 million reimagining of the lower level of the 50-plus year-old campus hub were unveiled last week.

A tour revealed a space that spacious, bright and welcoming.  A grand entrance off the Martin Luther King Commons eliminates several bottleneck entries. There’s a Starbucks already operating and upscale dining options are planned nearby. There’s also easy access to a relocated bookstore and there’s plenty of places to sit and eat or simply relax between classes.

Much of the new space for the revamped Holmes Student Center lower level was carved out of the former bookstore area, which now has new digs.

“We hope that this becomes a social hub, a place where students – as well as faculty and staff – will want to hang out, watch a ball game or listen to a concert,” said NIU President Dr. Lisa Freeman said in a statement last week. “It is an exciting part of our efforts to create a vibrant central hub of activity on campus.”