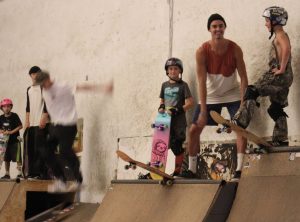 Skateboarders wait at the top of a ramp before proceeding during weekly Fargo Youth Skate League competition every Wednesday. The league is broken down into three trimesters each year and participants are given a trick book to track their progression in learning new skills. (Photo by Kelli Duncan / for Chronicle Media)

DeKalb’s historic Fargo Theatre has not screened a movie in decades but the cavernous space is still in use, just not in ways foreseen by the building’s designers.

Fargo Skateboarding started modestly in 2007 as Small Town Skate, a shop created by owner Ariel Ries and a friend.

But Ries was also thinking bigger and the former Fargo Theater, located just four blocks away, seemed a natural place to expand and grow.

“We had been looking at this (Fargo) space, the theater space, for years since the first year we started the skate shop,” she said.

Ries had a vision of an indoor skate park that she and her friends could use in the winter months. When the space became available in 2013, she and a group of about 10 friends chipped in for the monthly rent and she signed the lease.

“They all agreed that for one hundred dollars a month they would each get a key and they would help me build this and we would just do it privately for ourselves,” Ries said.

The friends began constructing a few half pipes and boxes to skate on through the winter. Ries continued running Small Town Skate a few blocks away until 2015 when she moved the skate shop to storefront space of the old theater.

It was then that she decided to rebrand the skate shop as Fargo Skateboarding in honor of the building’s rich legacy.

Soon, Ries decided that it was time to open the park up to the public because she thought it was something that every area skater should enjoy. 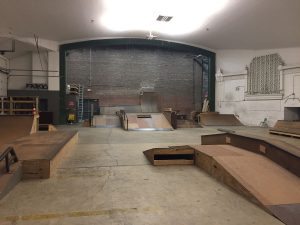 The former Fargo Theatre’s stage looms over a floor filled with half pipes and ramps. At right is a screened area which once contained an organ. (Photo by Jack McCarthy / Chronicle Media)

According to Ries, the Fargo Theatre was open from 1929 until 1952 when it closed due to bankruptcy. The space was vacant until the 1970’s when it was briefly used as a roller rink.

In the early 1980’s, the front lobby space was home to a designer clothing outlet before the space was bought by a moving company. The company used the large theater space as a warehouse.

“So since the opening in 2016, we’ve also developed a skateboard education program,” Ries said. “We have classes geared towards skateboard progression for all ages.”
Ries said they offer an informal beginner’s session for skaters of all ages on Saturday mornings from 10 a.m. to noon for just $5. They also offer structured weekly classes for beginners (Mondays 4-6 p.m.) and intermediate skaters (Tuesdays 4-6 p.m.). Day camps are available throughout the school year during winter break and spring break.

Experienced skaters can join the Fargo Youth Skate League which takes place every Wednesday from 4 to 6 p.m. The league is broken down into three trimesters each year and participants are given a trick book to track their progression in learning new skills.

“We have a point incentive program and it’s trimester based so every four months we have a competition,” Ries said. “Usually they have two minutes to land as many tricks as they can and the more advanced tricks that they land get more points and whoever lands the most and best tricks wins.”

Ries said they work hard to make sure that every skater—regardless of age, gender or ability—feels welcome and included at the skate park.

“Skateboarding can be very male dominated so we’re trying our best to change that,” Ries said. “On the second Sunday of every month we have our ‘ladies day’ session for women and girls of all ages and abilities.”

By providing that session, Ries said they have helped build confidence among teenage girls who may have wanted to try out skateboarding but were nervous to do so around other boys their age.

“That’s what we offer that I think makes this place really really special,” She said. “We not only encourage but, in a way, enforce positive interactions between our skaters. So if somebody lands a trick or is trying something that’s really hard for them we make sure that everyone is cheering them on and being supportive.”

Teaching kids how to believe in themselves and their abilities is one of the most important things Ries said she offers.

“Learning skateboarding is definitely something that is more mental than physical – it’s all about what’s going on in your head,” Ries said. “If you tell yourself that you can’t do a certain trick then you’re not going to be able to do it – you have to say yes.”

In this way, skateboarding teaches kids valuable lessons that can be applied to other aspects of daily life.

“I have parents coming up to me and telling me how they have seen drastic improvements in their kids’ behavior and their kids’ learning and academics,” she said. “You know, it’s all conne 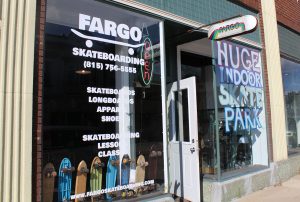 Ries said her passion for teaching kids to skateboard stems, in part, from the role that skateboarding played in her own life.

“I think skateboarding definitely was a sort of escape for me, a way to get away from whatever was going on at home,” Ries said. “And it was also a form of meditation because when you’re skateboarding you really can’t think about anything else besides what your next move is.”

Ries said, going forward, she wants to focus on expanding the youth skateboarding programs further so that she can share her love of skateboarding with as many kids as possible.

On Sept. 15, Fargo Skateboarding will be holding an Art Benefit for DisAbility to raise money so that Dan Mancina, a blind skateboarder, can come speak at the skate shop.