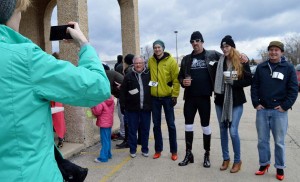 Participants in last Saturday’s Walk a Mile in Her Shoes even pose for a photo before the event, intended to create conversation about sexual assault awareness. (Photo by Jessi LaRue/for Chronicle Media).

Bryan Wiersma said he got some funny looks when he purchased his first pair of high heels.

After some browsing through DSW in DeKalb, he opted for 6-inch, silver, glittery heels.

Wiersma, of DeKalb, walked with more than 40 other people last Saturday as part of Safe Passage’s first Walk a Mile in Her Shoes event in DeKalb near Hillcrest Drive.

The event raised funds for the nonprofit organization, which assists domestic violence and sexual assault victims and their children through a variety of services including legal advocacy, housing, counseling, community education and more.

Prevention coordinator Sarah Slavenas said the event raised more than $2,500, which helps the organization when it needs it most.

“With the state budget issue, sexual assault services are not being funded,” Slavenas said. “This event will help fund some of our general services. But the main thing is to start a community discussion about [sexual assault.]”

Wiersma said the inaugural event was unique, and that he would definitely participate again if Safe Passage decides to hold the event again in the future.

“It’s a really important cause that needs more attention brought to it,” Wiersma said. “And there’s something special about men walking down sorority row in high heels. It raises the question of ‘why are they doing this?’ and that starts the conversation.”

Event participant James Davies, of Sycamore, said he wasn’t sure if his high heels were actually his size, because his toes had started to go numb.

However, he still enjoyed being a part of the event. He first heard about the event through a friend.

“The idea of walking in heels seemed like a funny, interesting challenge,” Davies said. “But then I looked into it and read more about it and it was for a good cause, which made it better. I haven’t heard of many places in the area like Safe Passage.”

Mary Ellen Schaid, Safe Passage Executive Director, said the organization serves more than 800 victims of domestic violence and sexual assault each year in DeKalb County.
Ashley Thompson and Kathryn Dennison, both of DeKalb, said they have friends who have benefited from Safe Passage’s services in the past, so they wanted to participate in the event to show their support.

Schaid said a fun, public event like the walk, especially during Sexual Assault Awareness Month, can create an important conversation.

“We need people to join this fight,” Schaid said. “We need to make people aware. [Sexual assault] is a huge problem in our community and our country.”