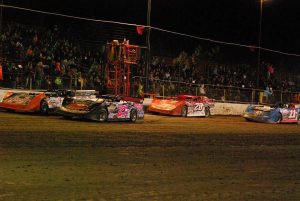 Sycamore Speedway is known for thrilling competition, delicious food and, of course, an adrenaline-inducing demolition derby at the close of every Friday race night.

General manager and promoter, Tiffany Olson, credits the track’s success to her family’s ability to balance years of tradition with new ideas to make the races even more competitive for drivers and the experience even more exciting for fans.

“We definitely hold on to what is important to us as a family, but we are constantly trying to come up with ideas to make this a better experience for racing fans and for people who maybe have never been to a race before,” Olson said. “We recently made the track wider and hauled in some clay to make room for more banking which makes the races more competitive.”

The Speedway, located east of Sycamore on Illinois Route 64, marked the anniversary with usual racing events and invited the Badger Midgets Association to come and race with them as well.

They also held “bubble gum races” where children are invited down onto the track to race to find gum scattered across the front straightaway. Olson said this is one family tradition which has stood the test of time. 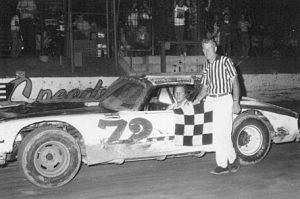 “That was the highlight of going to the track when I was young,” Olson said. “I remember my cousins and I usually had to stay at my grandparents’ house across the street while our parents worked at the speedway. But we’d be allowed to come for the bubble gum race and now my own kids have a blast with it too.”

Olson’s grandfather, Joseph Fabrizius, built the racetrack with his brother, Nick, and a few others back in 1960.

Originally named Bob-Jo Speedway, the track was first used for go-cart racing. They held their first stock car races on May 30, 1963 – almost exactly 55 years ago.  Olson said her grandmother has told stories of that first fateful night back when the track still had outhouses for bathrooms and the family had spent every penny they had to buy hotdogs to sell to fans.

“They were scrambling up to the very last minute to make that first night happen,” Olson said. “But like our website says they pulled it off and there were around 800 people in the stands that night.”

Olson said she grew up going to the races and it wasn’t long before she was put to work.

“When I was about six or seven, I was recruited to sell programs.” she said. “At the time, they were a quarter and I remember my grandmother would open up the ticket door and be like ‘I can’t hear you!’ Because we would have to yell ‘get your lucky number program’ and if we didn’t yell it loud enough she would lean over and say ‘I can’t hear you!’” 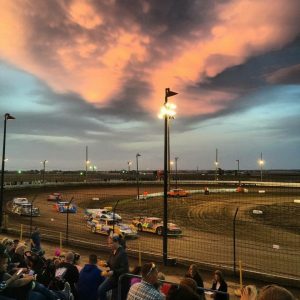 After Olson’s grandfather died in 2001, her grandmother briefly took over the business before passing the ownership on to her daughter—Olson’s mother.

Olson has been running the day-to-day operations of the track for eleven years now and said that her 11-year-old daughter, Natalie, is already taking an interest in the family business.

“She likes to help out in the concession stand, putting out the chips and the candy bars and she’s awesome for being like our little runner,” Olson said. “She’s been out there since she was two-years-old and she doesn’t like to miss a race, she loves the speedway.”

Today the speedway holds races in eight different classes – four on Friday and four on Saturday.

Olson said the speedway will be holding a special event on June 23 where drivers will take 55 laps around the track to honor the memories of her grandfather, Joe, and his brother, Nick.

General admission gates open at 6 p.m. Friday and Saturday. Admission is $12 for adults, $5 for kids ages five to eleven and kids four and under get in for free.

Races will be held every Friday and Saturday night all summer long. The regular racing season ends Sept. 8, but the track will remain open until Saturday, Sept. 29.