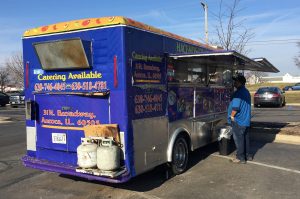 The Sycamore City Council is considering revamped rules for operation of food trucks, like this one serving lunches recently in Naperville. (Photo by Jack McCarthy / Chronicle Media)

It was the week before Christmas but the Sycamore City Council was thinking ahead to warm summer days and tasty treats served from food trucks.

The proposed ordinance, presented for a first read at the meeting, would amend the city’s business and license regulations, adding a category for mobile and stationary food truck vendors.

“With mobile food vending operations growing in Sycamore, it is important that regulation be established to ensure the businesses are operating in a fashion consistent with the City’s expectations,” according to a city background statement.

The new ordinance would clarify rules and costs and help protect existing  brick-and-mortar restaurants in a proposed season that would run from early May through the third full weekend of October — ending just before the city’s popular Pumpkin Festival.

“The current code does not have a mobile food vendor permit, rather the applications are reviewed and permitted as peddler licenses,” according to the statement. “The purpose of the new chapter is to create clear guidelines and regulations for mobile food vendors in Sycamore … while being mindful of public safety and creating a level playing field for permanent food service businesses.”

“The ordinance states that mobile food vendors would (also) not be permitted within 250 feet or any other permanent food service,” said City Manager Brian Gregory.

The ordinance would not apply to non-profit groups operating concession stands or the late October Pumpkin Festival. Gregory said roving ice cream trucks operate under different regulations and are not affected by this ordinance.

Both types of mobile food vendors would be subject to a background check, health inspections and pay specified fees for operations.

Existing licenses would be honored until expiration and then vendors would then be subject to new regulations.

No action was taken and the ordinance returns for possible final approval in January.