An extreme heat warning launched with hot air balloons on June 29 at the annual Eyes to the Skies Festival in Lisle at Community Park at 1825 St.

People were allowed to bring in one sealed and labeled water bottle per person to the paid admission event on two designated heat index days per https://www.eyestotheskies.org/balloons.html.

By 2 p.m. on Friday, temperatures were climbing to the mid 90s. 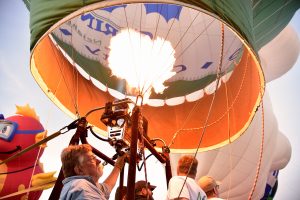 Mike Sommer of Deer River, Minnesota fires up a balloon during the balloon portion of the annual Eyes to the Skies Festival at Community Park at 1825 St. in Lisle in June 29. (Photo by Karie Angell Luc / for Chronicle Media)

Balloons were being inflated but stayed tethered at sunrise on Friday.

Riders could go up for a manageable height with the understanding balloons would remain in place, secured with roping, not airborne over wider berth, higher skies.

“And that means we’re going to keep them on the ground here.

“We’re on a marginal line with O’Hare (Chicago O’Hare International Airport) and they’ve asked us during the weekdays if we would not infringe on their airspace,” McClinton said.

“It’s awesome, super fun,” said one onlooker in queue for a ride in a tethered balloon.

Folks wanting an early glimpse of balloons on Friday could do so for free, with the benefit of watching the sunrise peek over parkland treetops.

Children 8 and under were free of gate entry charge. Active military personnel and veterans could enter the festival at no cost by showing identification.

“We come here every year, we love it,” said Diane Everett of Lisle who sat with Doreen Dorn of unincorporated Naperville and Jane Buege of Lisle. 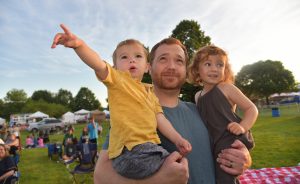 Dan Stilling of Wheaton attended the Friday, June 29 display with family. His children Pete Stilling, 1 and Josephine Stilling, 4, preferred the bright colored character balloons during the balloon portion of the annual Eyes to the Skies Festival in Lisle. (Photo by Karie Angell Luc / for Chronicle Media)

Pat Hall of Naperville, who grew up in Lisle, held long roping to a balloon on display.

“It’s a little breezy so I’m getting a little bit pulled but It feels great,” Hall said.

“I’ve been doing this for a long time,” he added.

All shows, music, and viewing of balloons were included in gate admission.

All proceeds generated from the festival support local charities.

Scott McClinton described what it’s like to ride in a hot air balloon.

“It is the most surreal feeling and experience you’ll have on two feet,” he said.

“You’re up in a balloon, you’re not encapsulized with a cockpit like you are on an airplane,” McClinton said.

“You’re just kind of standing in a big basket, looking out the window with no glass.

—- All Eyes to the Skies over Lisle this weekend —