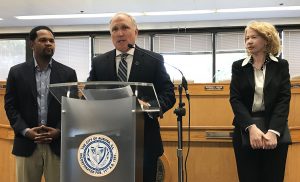 The city of Aurora wants everyone counted in the 2020 U.S. Census and is marshaling resources and people to ensure that happens.

“The purpose of the committee is to increase awareness about the census and to motivate respondents,” Caputo said during a media briefing last week at Aurora City Hall. “We intend to make sure everyone is counted.”

A $127,000 budget secured via grants will allow the committee to purchase technology for marketing and communicating about the census.

“The Complete Count committee will be working … to make sure we touch every neighborhood, every street and every individual in the city,” Thomas said.

The sprawling city of more than 200,000 residents covers portions of Kane, DuPage, Will and Kendall counties.

Aurora Mayor Richard Irvin detailed plans for his own contribution.

“We will launch (an) ‘I Count’ campaign next month where I will personally go out into communities and knock on doors with the same fervor and commitment that I made during my campaign (for mayor) when I knocked on doors asking people to vote for me,” he said. “We’ll visit schools and churches and wherever folks are gathered for the next seven months.”

The U.S. Constitution requires a count of all residents every 10 years. Census data is used to determine a state’s representation in Congress and is the basis for drawing districts for federal, state and local elected offices as well as distribution of federal funds.

The census, set to begin on April 1, 2020, will be conducted primarily online for the first time but the U.S. Postal Service and face-to-face contacts remain essential tools.

“The preferred method of response is to go online and fill out the questionnaire,” Caputo said. “However, if a household does not respond, several reminder cards and letters will be sent by the Census Bureau. If no response is received, a paper questionnaire will be issued between April 8 and April 16. Then if no response is received after April 27, a Census worker will be dispatched in attempt to count identifiable households.” 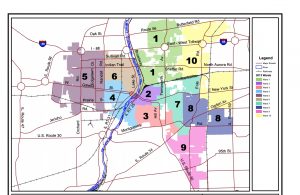 “To succeed in 2020, the Census Bureau will need countless organizations, nonprofits, companies, and government agencies at the federal, state and local levels to communicate a simple message to all Americans: The success of your communities depends on an accurate census,” Ross wrote in an op-ed piece.

DuPage County is also working toward a full census count.

In May,  the County Board created a DuPage Complete Count Committee to be chaired by District 5 representative Sadia Covert. It will include a board member and a mayor from each district.

“It’s crucial that we count all individuals living in DuPage County as this data will also be used for congressional, state, legislative, county and local government representation as part of the reapportionment and redistricting process,” County Board chairman Dan Cronin said in a statement. “We want our count to be accurate so that our communities are fairly represented here, in Springfield and in Washington, D.C.”

The committee, which began work in mid-June, will also include representatives from the Regional Office of Education, the DuPage County Health Department and the DuPage Community Services Department.

One controversial question will be absent from the 2020 census. Trump Administration officials had sought to ask if respondents were U.S. citizens. Opponents contended that the question would discourage noncitizen and immigrants from responding and result in an undercount.

In June, the U.S. Supreme Court rejected the plan to add a citizenship question, saying the Trump Administration did not adequately explain its reasoning.