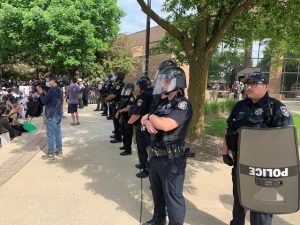 A 19-year-old Aurora man has been arrested on a federal civil disorder charge for allegedly throwing an explosive device at a Naperville police vehicle during a June protest.

Christian Rea was arrested Thursday (June 25) in connection with throwing an explosive device in the proximity of a police vehicle and officers. The device detonated causing an explosion, according to a criminal complaint and affidavit filed in U.S. District Court in Chicago. Panic ensued in the crowd of protesters, with people running in all directions, the complaint states.

The Chicago office of the FBI investigated the case, with assistance from the Naperville and Aurora police departments and the FBI Joint Terrorism Task Force.

“Federal law enforcement will use all tools available to hold accountable individuals who interfere with law enforcement officers performing their duties during a civil disorder,” said U.S. Attorney John Lausch. “We will continue to work with our federal, state, and local partners to apprehend and charge individuals engaging in violent crime.”

The charge in the complaint is punishable by a maximum sentence of five years in federal prison. If convicted, the court must impose a “reasonable” sentence under federal statutes and the advisory U.S. Sentencing Guidelines.