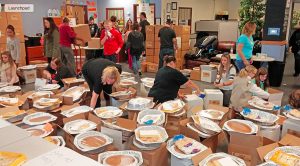 Basket Brigade volunteers assemble some of the estimated 195 meals they prepared for distribution to families in need in 2015. The goal this year is 500 families. (Basket Brigade of Suburban Chicago photo)

Even though the leaves haven’t begun to fall from the trees, a group of suburban Chicagoans are already making big Thanksgiving plans.

The event will be held at The Chicago Loop sports Bar & Grill, 7 West Streamwood Blvd. in Streamwood.

For a $10 donation, attendees can enjoy a benefit concert with music, raffles and a free buffet dinner said Brian Walsh, a founder of the nonprofit Basket Brigade.

From 6-9 p.m., there will be crafts and coloring contests for kids, and from 9 p.m to midnight the band Chasing Alice will perform including special guest Katie Hibben.

“We know that a lot of people fall on hard times,” said Chasing Alice’s lead singers Donna Muttini. “We’ve all been there, so this is very near and dear to our hearts.  We’re so happy to do this as a band.  We are so blessed and feel it’s important to give back to our community, especially during the holidays.”

This year, our goal is to raise enough money to provide Thanksgiving dinner for 2,500 people, Walsh said.

In 2015, its first year in operation, the group raised $7,000 and utilized more than 120 volunteers to create baskets and hand deliver complete Thanksgiving dinners to 195 families throughout the Streamwood, Bartlett, and Hanover Park areas, Walsh said.

“Each basket fed a family of five, so we were able to bring Thanksgiving to 975 people who may not otherwise have been able to afford to celebrate due to difficult circumstances, “ Walsh said. 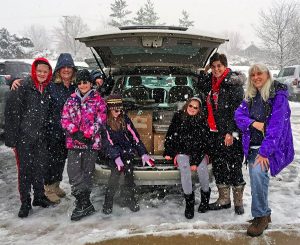 Basket Brigade volunteers had to brave heavy snow to distribute meals in 2015 but managed to get the job done. (Basket Brigade of Suburban Chicago photo)

This year, the goal more than doubled. The group hopes to provide Thanksgiving dinner to 500 families or 2,500 people.

Dinners will include turkey, stuffing and side dishes. Each basket will also include a note which states that if someday the recipient is in a position to provide a Thanksgiving dinner to another family they do so.

Families do not “self-identify” to receive a basket. Instead Walsh said they are nominated. Therefore, receiving the basket is a surprise to the family.

The Basket Brigade is a worldwide movement started by the self-help guru writer and motivational speaker Tony Robbins who grew up in a struggling family and remembers as a child receiving a Thanksgiving basket full of food.

Today, more than three million people each year receive a Thanksgiving basket through local outgrowths of this movement.

The idea of forming a suburban Chicago chapter of the Basket Brigade was born after Walsh’s mother had a prolonged hospital stay at the University of Chicago hospital.

During her hospitalization, Walsh’s family wanted to bring her Thanksgiving dinner.

However, the family quickly decided to also bring a Thanksgiving meal to the hospital staff who were giving up Thanksgiving with their own families to care for Walsh’s mother and other patients.

On the drive home from the hospital, Walsh’s twin six-year-old daughters said, “We should do something like that every year.”

After Walsh’s mother passed away, Brian and his wife Cherish Walsh decided to make giving back a yearly occurrence.

Together, they created the suburban Chicago chapter of the Basket Brigade under the umbrella of the Lorraine M. Walsh Memorial Foundation to honor Walsh’s mother.

On Nov. 19, the Saturday before Thanksgiving, the Basket Brigade will gather to pack Thanksgiving packages and fan out around the community to deliver each basket in person.

Last year, the deliveries took place during a snowstorm, Walsh said.
Afterward, the volunteers gathered for a party and shared stories about the deliveries.

“This also is a growth opportunity for the giver as well,” he said.

Families in need can be nominated by completing an electronic form at http://basketbrigade.net/nominate-a-family/