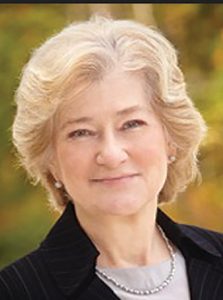 The College of DuPage Board of Trustees has selected Dr. Ann Rondeau to serve as the sixth president in the College’s 49-year history.

Rondeau, who takes over as president on July 1, was among three finalists after resulting from a nationwide search.

“Our three candidates were outstanding,” Board Chairman Deanne Mazzochi said. “But the Board concluded Dr. Rondeau represented the best fit for the institution and our community.”

Rondeau is currently a consultant and Partner with IBM Watson Group. She is a past president of the National Defense University, a consortium of five colleges and nine research centers in Washington, DC.

“I am humbled and honored that the Board of Trustees has confidence in my ability to serve successfully as the President of College of DuPage,” Rondeau said. “I am thrilled to become a part of this truly stellar, leading-edge academic community. I look forward to supporting the students, faculty, staff and the broader College of DuPage community.”

The hiring concludes a saga that began with the departure former president Robert Breuder, who was fired last October in the wake of investigations into spending and other controversial policies. Joseph Collins has served as acting president since April.

Rondeau has 26 years of experience in significant military and educational roles, including Deputy Commander of the U.S. Transportation Command in Illinois, Pentagon Director/Chief of Staff for the U.S. Navy Staff, Commander of the Navy Personnel Development Command in Virginia, Commander of the Naval Service Training Command at Great Lakes, Ill., Pacific Fleet Staff Chief of Staff in Hawaii, Commanding Officer of Naval Support Activity in Tennessee and other staff and commanding responsibilities with policy, support and student service.

Rondeau’s national reputation comes from her entrepreneurial approach and business savvy, her roles as National Security Advisor to the U.S. Attorney General and as a White House Fellow assigned to the U.S. Department of Justice.

In addition to graduating from numerous leadership development programs sponsored by IBM, the Center for Creative Leadership and the School of Business at the University of North Carolina, Rondeau holds a B.A. from Eisenhower College (NY), an M.A. from Georgetown University (DC) and an Ed.D. from the College of Education at Northern Illinois University in DeKalb. She was awarded an honorary doctorate in public service from Carthage College (WI).

“As I considered the choices for our next College president, I sought an individual who deeply understands the mission of College of DuPage to provide accessible, affordable education to our community and an individual who innately recognizes the unique and important roles played by each College stakeholder — students, faculty, staff and the community,”

“Dr. Rondeau is an individual who not only has the skills to address our present challenges but the inspiration to lead the College toward a better tomorrow. She is an individual who will be a visionary leader and also a humble listener,” Vice Chairman David Olsen said

Rondeau among three finalists provided to the Board by the College of DuPage Presidential Search Committee. The search committee included a wide range of volunteers affiliated with business, legal, financial, government and education communities in District 502, as well as a voting student representative, taxpayers and members of the COD faculty, administration and managerial and classified staff.