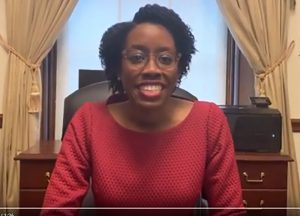 U.S. Rep. Lauren Underwood (D-14th) is calling for an impeachment inquiry of the president of the United States, saying that “the American people deserve all the facts and full transparency.”

Saying that “no person in America is above the law,” U.S. Rep. Lauren Underwood (D-14th) has joined the list of Democratic lawmakers calling for an impeachment inquiry of the president of the United States.

“I find it sobering that a lot of the conversation is being framed in terms of winners and losers,” Underwood said in a Twitter post. “Let me be clear: no one wins when Congress is compelled to investigate impeachment. This is a tragedy for our country.”

The congresswoman said the Mueller Report laid out substantial evidence that President Donald Trump’s campaign worked with a foreign adversary to influence the 2016 election. The Naperville Democrat noted that the Mueller Report provided a lot of information, but left open a lot of key questions that U.S. House committees are investigating.

Underwood said that she backs the impeachment-related investigation being pursued by five House committees.

“The American people deserve all the facts and full transparency,” Underwood said. “And, Congress needs this information to inform a decision to move forward with the very sobering act of drafting articles of impeachment, and just as importantly, we need the information to better understand how our election was influenced by a foreign adversary to prevent it from ever happening again.”

The freshman congresswoman said she is troubled that the president has stated that he would welcome foreign help to win the 2020 election.

Casten said he did not celebrate his decision to support the opening of an impeachment inquiry, but felt that not doing so would shirk his responsibilities.

“I didn’t run for Congress to impeach the president – any president. I ran to fight climate change, push for commonsense gun reform, uphold women’s right to choose, and strengthen our economy, but I also ran for office because I felt the people of my district deserved transparency from their elected representative,” Casten said in a June statement.

“I do not make this decision lightly,” he added. “I do not relish the idea of pursuing an impeachment inquiry.”

Casten said he understands the serious implications associated with an inquiry, “but when our president displays blatant disregard for the law and undermines the fundamentals of our democratic institutions, it’s in our duty to use all of the tools at our disposal to uncover the whole truth for the American people.”

The Downers Grove Democrat said he read the report from special counsel Robert Mueller in its entirety and called its findings “alarming.”

“The Mueller Report raises serious questions about Russian interference in our elections and the integrity of the White House,” Casten said. “Over two years into his presidency, we still do not know whether the president of the United States is beholden to foreign powers. This is a threat to our republic; and I struggle with the fact he may have instructed others to lie for him, tried to intimidate witnesses and cover the truth from the American people.”

The congressman said that partisanship must be put aside and the focus put on the common cause of our nation’s future.

“We cannot allow this administration to continue to divide us — or to stand idly by letting foreign interests do so. What was true when our country was founded must still be true today. No one is above the rule of law,” he said.

Casten said he would not prejudge the outcome of any inquiry. He said as a scientist and businessman, he believes Congress must follow the facts to make an informed decision.

“An inquiry affords the transparency, so long as we do not presume its outcome,” Casten said. “I hope the worst of my concerns prove not to be true, but we must have the facts.

“I do not celebrate this moment but neither do I shirk from this responsibility; the truth must prevail.”

A spokesman for another suburban Democratic congressman, Bill Foster (D-11th) did not respond to an inquiry regarding the congressman’s position on impeachment.

The organization Need to Impeach lists Foster as not supporting impeachment as of earlier this month (August).

All of Illinois’ Republican congressmen voted to table a vote on proceeding with an impeachment inquiry when a vote was taken in July, as did all but four of Illinois’ Democratic congressional representatives.

Casten and Underwood voted to table the inquiry in that vote, but it appears their vote would be different today. Also calling to table the inquiry in the July vote were U.S. Reps. Cheri Bustos of Moline, Dan Lipinski of Western Springs, Mike Quigley and Bobby Rush of Chicago, Bill Foster of Naperville, Raja Krishnmoorthi of Schaumburg and Brad Schneider of Deerfield.

Only four Illinois Democratic congressional representatives voted to move forward with impeachment proceedings in that July vote. They were Danny Davis and Jesus “Chuy” Garcia of Chicago, Robin Kelly of Matteson and Jan Schakowsky of Evanston.