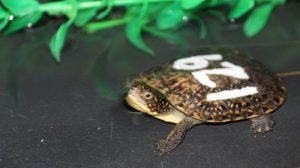 Blanding’s turtles are medium-sized, semi-aquatic turtles whose distribution is concentrated around the Great Lakes. (Photo courtesy of Cosley Zoo)

Conservation is a key component of Cosley Zoo’s mission, and one of the zoo’s conservation efforts has involved Blanding’s turtles.

Blanding’s turtles are medium-sized, semi-aquatic turtles whose distribution is concentrated around the Great Lakes. Their population has been declining in recent years due to the loss of available wetland habitat.

In addition, increased pressure from predators has caused a decrease in the number of turtles surviving to sexual maturity (15-20 years of age). In 2009, Blanding’s turtles were added to the endangered species list in Illinois.

Cosley Zoo participates in the Head Start component of the program, which aims to increase the number of Blanding’s turtles surviving long enough to reproduce.

Staff from the Forest Preserve District of DuPage County collect gravid (pregnant) turtles from the wild and houses them until they lay their eggs.

After the eggs hatch and the young turtles are off to a good start, some of them are raised by Cosley Zoo staff until they reach one year of age. The turtles are reared at an accelerated rate, so that when they are released back into a DuPage County wetland, they are larger than naturally reared turtles and should therefore be less vulnerable to predators.

The young Blanding’s turtles are not on display at the zoo to minimize their exposure to humans, but the zoo does have an exhibit containing adult Blanding’s turtles which can be viewed by the public seasonally, as well as a live video feed of the turtle rearing area.

Since 2001, Cosley Zoo has reared and released over 3,000 Blanding’s turtles, providing a beacon of hope for this Illinois endangered species.

This past September, 52 juvenile turtles — including Beau, a Blanding’s turtle that Cosley Zoo zookeepers successfully revived using CPR this past Valentine’s Day — were released at a DuPage County Forest Preserve site.

“The staff at Cosley Zoo is excited to be a part of this ambitious conservation program,” Animal Curator Angie Dosch said. “We believe we have an obligation to protect and conserve animals in their native habitat. Saving wildlife is one of the reasons many of us get involved with zookeeping and to have the opportunity to play a part in the recovery of Blanding’s turtles is personally very rewarding.”

For more information on The Head Start program and how to get involved, visit cosleyzoo.org.