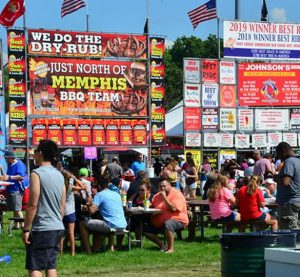 Ribfest fans will have to wait until 2021 to enjoy barbecue, carnival rides and musical acts at its new Romeoville home. (Ribfest photo)

The Naperville Exchange Club has announced that the 2020 Ribfest has been called off.

Ribfest, set to debut in Romeoville after a three-decade run in Naperville, was scheduled to run from July 2-5 at Deer Crossing Park.

“The Club has concluded that the health and safety of Ribfest attendees, volunteers, and entertainers cannot be guaranteed for such a large-scale public event,” the Club said in a statement release on Monday. “This extremely difficult decision comes after much deliberation about any possibility of presenting the family fun, philanthropy, dining, and music that have become synonymous with Ribfest for thousands of attendees every year.”

The Exchange Club said it would now look to stage Ribfest in 2021.

“We look forward to hosting Ribfest in Romeoville come 2021,” said Mayor John Noak. “We continue to have a strong partnership with the Exchange Club of Naperville and will continue to support its mission.”

The annual event served as a fundraiser for programs combatting child abuse and domestic violence.

“The charitable nature of this annual fundraising event allows us to provide vital funds to agencies that focus their activities on the prevention of child abuse and domestic violence in all forms,” Ribfest Chair Bob Black said in the statement. “As disappointed as we are not to have a 4th of July with Ribfest, after all this hard work, the greatest disappointment is the impact of not being able to raise funds through Ribfest this year for those deserving nonprofit organizations.”

Information on refunds will be announced at a later date. Ticket holders will also be given the option of making a tax-deductible donation toward the Exchange Club of Naperville’s mission.

Ribfest would have celebrated its 33rd annual event in July and included varieties of barbecue and other food, a carnival and musical acts such as Styx, REO Speedwagon, rap star Nelly and others.