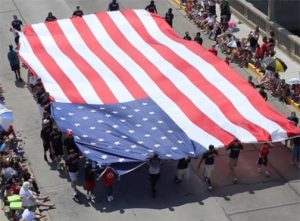 Aurora’s annual Fourth of July parade and fireworks show have been canceled for 2020. (City of Aurora photo)

A night sky filled with streaks of colors and riverfront crowds exclaiming their delight will be missing in Aurora this Independence Day.

“Large scale events would be ideal environments to spread the COVID-19 virus throughout the community,” said Irvin on Wednesday, May 13 as he resumed a series of City Hall media briefings after a nearly two-month hiatus. “So we, along with communities throughout the country, made the hard decisions to alter and cancel events.

“The science remains the same. We know the importance of social distancing and making sure no large gatherings commence to further spread this deadly virus throughout our communities.”

As a result, nearly all city-sponsored public events have now been canceled through the end of summer.

“This includes the city’s Fourth of July parade and fireworks,” said Irvin. “Both of these events generally bring together more than 40,000 for the parade in the morning and the fireworks at night, oftentimes standing shoulder-to-shoulder, making it impossible to practice social distancing.”

The city plans to announce a virtual July 4 virtual event at a later date.

Aurora’s entertainment centers — Paramount Theater, Copley Theater and RiverEdge Park — will also remain closed, affecting a series of scheduled concerts and performances. Officials have worked to rearrange and reschedule events for next year.

Blues on the Fox, set June 19-20, is among the biggest casualties.

“We’ve been working with our agents and our managers to reschedule these concerts for next summer, both inside the Paramount and at RiverEdge Park,” said Tim Rater, president and chief executive officer.  “And that’s where we’re at right now. We have nearly every artist confirmed for next summer and those that aren’t confirmed are interested in coming back.

“We just know we will be open again, when it’s possible … and when it’s safe,” Rater said.

The lone exception to the cancellation and closure list is the Aurora Farmers Market, which is scheduled to open its 108th season on June 17.

The market, held at Water Street Square, will have restrictions on number of customers, entry and exits and require face coverings and social distancing.

“The market may look different but it will allow our residents to still obtain fresh fruits and vegetables while supporting local businesses and farms.”

Also, the Fox Valley Park District announced that both community swimming pools – the Phillips Park Aquatics Center and the Splash Country Water Park – will not open for the summer season as a result of the COVID-19 crisis.

“What we have seen from Aurorans these past two months is nothing less than amazing,” said Irvin, who had his own recent battle with COVID-19. “We are all truly essential community members and our actions during this time have been vital in our fight. Because of our decision to stay home, socially distance, to wash our hands regularly and wear face coverings when outside our homes, we have helped to save lives.”

Irvin said that the number of cases and deaths “could easily have been 10 times worse” had these practices been followed.