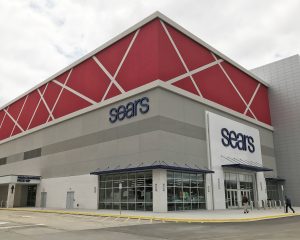 The recently renovated Sears store at Oak Brook Mall closed earlier this week after a company announcement and one-week liquidation process. The store, which has been located at the mall since the early 1960s, reopened less than seven months ago following a lengthy renovation project. (Photos by Jack McCarthy / Chronicle Media)

College of DuPage music student Melissa Wang’s original composition, “Downright Up and Left,” has been named winner of the 2019 Jack Stone Award for New Music, earning her a cash prize and the opportunity to travel to Texas to receive the honor in person and see her piece performed live.

The Jack Stone Award for New Music is a national competition open solely to community college students exploring music composition. Wang’s winning composition will be performed by the Line Upon Line Percussion ensemble during an awards ceremony in the Palmetto Center for the Arts at Northwest Vista College in San Antonio.

Wang said she was thrilled with winning the competition.

“The best thing about winning the award is going to Texas where the weather is 40 degrees warmer than Illinois,” she said. “Also, I’m looking forward to hearing another group’s interpretation of my composition and to attend rehearsals with the group, because the music making process is as irreplaceable of an experience as the performance on stage.”

Wang, a Downers Grove resident who started playing percussion in fifth grade, said she chose College of DuPage as an affordable opportunity to help her decide on a career path.

“I was undecided between graphic design, animation, architecture, and music education, she said. “I’ve also been interested in being a teacher since third grade, but I did not know what kind of teacher I wanted to be. I became particularly interested in music education after leading rehearsals for a tune I arranged for the COD Percussion Ensemble.”

Wang plans to graduate COD this spring with an Associate in Fine Arts degree in music and hopes to earn her master’s degree in music education, eventually teaching music in a high school or college.

in murder of spuds

A Bartlett man accused of strangling his wife, Nancy, to death has entered a blind plea of guilty to one count of Second Degree Murder.

Carlo Madonia, 60, 224 Lido Trail, appeared in Court recently  where he entered his plea in front of Judge Brian Telander. On June 2, 2017, Madonia’s bond was set at $3 million with 10% to apply. He has been held in custody at the DuPage County Jail since that time.

On May 31, 2017, Bartlett police officers responded to a call of medical emergency or possible death at the couple’s home. Upon their arrival, officers found Madonia standing in the kitchen with blood on his hands. He was taken into custody at this time.

When officers searched the home, they found Nancy’s body upstairs. She was pronounced dead at the scene. An investigation into the murder revealed that at some point in time on that day, the defendant and his wife got into a verbal altercation which turned physical resulting in Madonia strangling his wife to death.

“Nearly two years ago, an argument between Mr. Madonia and his wife Nancy took a tragic turn resulting in Carlo Madonia strangling Nancy to death,” State’s Attorney Robert Berlin said. “Mr. Madonia accepted responsibility for the murder of his wife. This is an extremely sad case and it is my hope that Nancy’s surviving family and friends may begin to find some measure of closure knowing that the man responsible for her death has taken responsibility.”

An Aurora woman was arrested over the Easter holiday weekend after shooting a handgun at her neighbor during a dispute in the parking lot of their apartment complex.

Lagwanda Hudson, 44, of the 2700 block of Village Green Dr, was arrested Saturday morning after firing a handgun at her neighbor during a fist fight in the parking lot of their apartment complex.

At 9:40 a.m., April 20, Aurora Police Department was dispatched to a call of shots fired at the Village Green Apartment Complex on the City’s Far East Side.  Hudson and another resident, a 30-year-old Aurora woman, had been involved in an ongoing dispute for the past few weeks.

Police learned that this morning the two women became involved in a fist fight in the parking lot outside the apartment complex after one reportedly saw the other giving “dirty looks.”  During the altercation, Hudson reportedly retrieved a Glock pistol from her purse and fired once at the victim, narrowly missing the left side of her head.

The pistol was recovered from Hudson’s vehicle, and she was taken into custody without further incident.  The victim was treated and released from a local hospital for minor scratches and pain in her left ear, presumably from the firearm discharge.

The DuPage County State’s Attorney’s Office authorized one (1) count of Aggravated Discharge of a Firearm, a Class 1 Felony.

Hudson was transported to the DuPage County Jail to be arraigned on bond.

Board renames new park as

Naperville resident Ginny Wolf Chivas, a descendant of one of the founding families of Naperville, asked the Naperville Park District board at their January 31 meeting to consider renaming Southwest Community Park “Wolf’s Crossing Community Park.” The new name would reflect the history of the 33-acre park site, located at 3252 Wolf’s Crossing Road, which was farmed by Chivas’ great-great grandfather, Amos Wolf, in the 1840s.

Chivas began pitching her idea to the Naperville Park District at a board committee meeting on Dec. 21, explaining that in Naperville’s early history there was a community spirit among the settlers as they helped each other build barns and survive crises. She sees that attitude of helpfulness continuing in Naperville today, in its neighborhood groups and service clubs. In Chivas’ view, naming the park “Wolf’s Crossing Community Park” honors not only the Wolf family, but the community of families who worked together to establish Naperville.

Following Naperville Park District board policy, the board waited for 60 days before voting on the park name change at their April 11 meeting.

The land at Wolf’s Crossing Community Park was farmed until 2018 under a lease agreement, and is now ready for park development to serve the new and growing residential area around the park.

Construction will begin in summer 2019. The community is invited to a groundbreaking ceremony on June 19 at 4:30 p.m. to be held at the park site at 3252 Wolf’s Crossing Road.  Details will be posted at www.napervilleparks.org.

The City of Aurora, in partnership with Will County, is hosting a free Electronics Recycling Day on Saturday, May 4 from 9 a.m.-1 p.m.. in the City’s public parking Lot X, 309 N. River Street.

All items are free to recycle, including televisions, but registration is required.

Due to the high demand for service the event is open to Aurora residents only. ID is required. All residents MUST register for a time slot online at www.tinyurl.com/AuroraRecycles2019 or by calling 630-256-4636. Space is limited per hour. Each car is limited to five items in total, including two   total screens – either television OR computer screen.

Only approved household items and electronics will be accepted.

Cars should enter from Cedar Street via Lake Street. Signage will be posted in the area.

solar at The Preserve

At the recommendation of Forest Preserve District of DuPage County President Daniel Hebreard, commissioners approved installing a solar power system on the cart storage building at The Preserve at Oak Meadows.

Estimated to cost $166,533, the panels are expected to provide 102% of the building’s power. Because it is projected to generate more power than it needs, the system would be eligible for ComEd’s net metering program, resulting in additional savings. Other available financial incentives include solar renewable energy certificates and ComEd’s distributed generation rebate.

In addition, a new clubhouse proposed for the golf preserve would be equipped with a green roof, bird-safe glass to reduce the number of birds flying into the window, sustainably sourced wood, and LED light systems. And the preserve’s 75 golf carts would also be fully powered by solar energy.

The Preserve at Oak Meadows underwent a major two-year environmental restoration project that improved stormwater management and water quality for Salt Creek, enhanced habitat for fish and other aquatic species, and created a premier 18-hole public golf destination. It reopened for a brief preview season in late summer 2017 and had a full grand-opening season in 2018.

The property was reconfigured to reduce flooding in nearby communities by holding an additional 20 million gallons of stormwater from Salt Creek during flood events, while also minimizing flood damage to the course.

“This year we saw the highest number of high schools register for the Sustainable Design Challenge than any year in the past,” said DuPage County Stormwater Management Committee Chairman Jim Zay. “This proves how important this learning opportunity is for our local high schools and for County staff and elected officials who talk to the student presenters.”

More than 30 student groups presented models of their designs to a panel of judges, as well as the public, County Board members, local professionals and County and municipal staff.

Students discussed the design elements that made their building sustainable, including renewable energy sources such as solar panels and wind turbines and water conservation elements such as native plant landscaping, rain barrels and other green infrastructure for stormwater management.