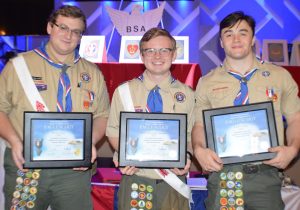 Boy Scout Troop 575 has awarded the Eagle rank, Scouting’s highest rank, to Dylan Stumbris of Wheaton, Noah Kotke of West Chicago, and Kelson Young of Winfield. The boys are the 52nd, 53rd and 54th scouts from the Troop to be awarded this rank.

Ceremonies were held May 25 at The Well Church in Geneva, the location of each of the scouts Eagle Projects.

The Eagle rank is the highest rank in Boy Scouts. Nationally, only 5% of Boy Scouts achieve this rank.

Dylan Stumbris joined Boy Scout Troop 575 from Cub Scout Pack 365 in Wheaton, graduated from Wheaton Warrenville South High School in 2018, and is attending the University of Illinois at Urbana-Champaign where he is studying biology.

Noah Kotke joined Boy Scout Troop 575 from Cub Scout Pack 532 in West Chicago, Graduated from West Chicago High School in 2018, and is attending Elmhurst College where he is majoring in special education.

Kelson Young joined Boy Scout Troop 575 from Cub Scout Pack 575 in Winfield, graduated from Wheaton North High School in 2018, and is attending Missouri University of Science and Technology where he is studying chemical engineering.

Winfield Boy Scout Troop 575 was founded in 1997 and is made up of scouts from throughout Western DuPage County. The Troop is known for its commitment to the community, developing the moral character and leadership skills of its members, and producing Scouts with exceptional outdoor skills.

A Bartlett man accused of killing his mother appeared at a bond hearing this last week where Judge Robert Miller set bond at $5 million.

Edward Mitzelfeld, 64, of the 700 block of Bryn Mawr Avenue, was accused of stabbing his 93-year-old mother to death inside the home they shared.

On May 29,  Bartlett police responded to a call and encountered Mitzelfeld in the front yard of the house with his hands raised. Officers then entered the home and found Frances Kelly lying face down on the kitchen floor in a pool of blood.

Mitzelfeld’s next court appearance is scheduled for June 3, 2019, in front of Judge Miller for the Court’s ruling on the State’s motion to appoint a clinical psychologist.

The Illinois Department of Public Health has confirmed the first mosquitoes to test positive for West Nile virus in Illinois for 2019.

DuPage County Health Department staff collected the positive mosquitoes on May 21, 2019 in Wayne. No human cases of West Nile virus have been reported so far this year.

“The recent rains are leaving many pools of water behind, not only in sewer systems under streets and drainage ditches along roads, but in our own back yards,” said Acting IDPH Director Dr. Ngozi Ezike.

“As we start to see higher temperatures, we will start to see more West Nile virus activity. While we see West Nile virus in Illinois every year, it is important not to become complacent.  It’s easy to take precautions to protect yourself by wearing insect repellent and getting rid of standing water around your home.”

People who see a sick or dying crow, blue jay, robin or other perching bird should contact their local health department, which will determine if the bird will be picked up for testing.

West Nile virus is transmitted through the bite of a Culex pipiens mosquito, commonly called a house mosquito, that has picked up the virus by feeding on an infected bird. Common symptoms include fever, nausea, headache and muscle aches.

Symptoms may last from a few days to a few weeks. However, four out of five people infected with West Nile virus will not show any symptoms.  In rare cases, severe illness including meningitis, encephalitis, or even death, can occur.

People older than 60 and individuals with weakened immune systems are at higher risk.

The community is invited to celebrate the groundbreaking of Wolf’s Crossing Community Park, formerly known as Southwest Community Park, on Wednesday, June 19 at 4:30 p.m.

Parking is not permitted on Trumpet Avenue.

Development of this 33-acre community park will bring a variety of recreational elements to southwest Naperville, the fastest growing residential area in the city. The park features were chosen based on extensive community input through a series of meetings, online surveys and email communication in 2018, with more than 2,000 people participating. The park will include a 1.4-mile trail, a splash pad, a playground, athletic fields, basketball, tennis, volleyball and pickleball courts, a multi-purpose hill, a pavilion, the District’s first challenge course, restrooms and parking.

The project will be funded, in part, by an Open Space Lands Acquisition and Development (OSLAD) grant from the Illinois Department of Natural Resources.

The Aurora Hispanic Heritage Advisory Board (AHHAB) will host its 17th Annual Community Breakfast at 7 a.m. on June 6 at Gaslite Manor, 2485 Church Road.

The annual ceremony – with the theme Reaching for the Stars – will bring the community together to celebrate excellence in Aurora’s Hispanic community by honoring students and recognizing community leaders for their commitment to the City of Lights.

This year, AHHAB will award $15,000 in college scholarships to local high school seniors and college students.

The keynote speaker for the breakfast is State Representative Karina Villa.

Born and raised in West Chicago Villa is a lifelong resident of Illinois’ 49th district.  She earned a Master’s Degree in Social Work from Aurora University and is a former school social worker and previously served as an elected school board member of West Chicago School District 33.

In November 2018, she made history when she was elected as State Representative of the 49th district – the first Latina to serve in this capacity.

In January 2019, she was sworn in and named member of the General Assembly’s Appropriation Committee for Elementary and Secondary Education, Health Care Availability and Access Committee and Mental Health Committee, among others.