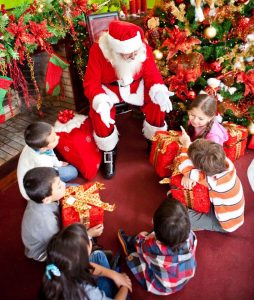 Fox Valley Mall in Aurora will host two “Soothing Santa’ events for children with special needs on Dec. 1 and 8.

The DuPage County Board voted 11-6 last week to repeal the ban on video gambling in unincorporated areas of the County.

The county’s video gaming ban has been in place since 2009, but the Board felt lifting the ban would provide an economic benefit.

“Our unincorporated restaurants, bars, or other liquor license holders were at a disadvantage to their neighboring municipal establishments. In some instances, two restaurants across the street from each other were held to differing standards because of this ban,” said Jim Zay, County Board Vice Chairman. “By repealing this ban, we’ve created a level playing field for unincorporated businesses.”

Under the Video Gaming Act passed by the General Assembly, unincorporated businesses who have a valid liquor license may apply for a video gaming license through the state. Each establishment may install up to six video gaming terminals at their facility.

DuPage County could see an estimated $275,000 in annual revenue from video gambling.

Bond has been denied for a Calumet City man accused of stealing approximately $40,000 worth of merchandise from a Wheaton Sprint store.

Denzel Furance, 20, appeared at a bond hearing last week where Judge Jeffrey MacKay ordered Furance to be held without bond.

Furance has been charged with one count of Armed Robbery (Class X Felony) and three counts of Aggravated Unlawful Restraint (Class 3 Felony.)

At approximately 8:08 p.m., Nov. 8, Wheaton Police officers responded to a call of an armed robbery at the Sprint store located at 212 Danada Square West. At approximately 7:45 p.m. that evening, a man, later identified as Furance, allegedly entered the store armed with a semi-automatic weapon and wearing a mask, medical gloves and a hooded sweatshirt.

Once inside the store, Furance allegedly ordered two employees at gunpoint to a back storage room where a third employee was located along with products and the store safe. He then ordered one of the victims at gunpoint to bind the wrists and ankles of the other two employees with duct tape. Furance then bound the wrists and ankles of the third victim with duct tape.

Furance then ordered the employees to open the safe containing electronic devices and he placed approximately 58 items from the store into garbage bags he had brought with him.  Furance then covered the mouths and eyes of the three employees with duct tape and exited the store, inadvertently dropping some items on his way out.

Several minutes later, Furance returned to the store to retrieve the items he had previously dropped and then fled the scene. The investigation led authorities to Furance, who was apprehended in Lansing, Ill., on Nov. 11.

College of DuPage faculty, staff and students will collect and donate much-needed items to more than 20 community agencies this winter through the annual Up to S.N.O.W. Good initiative.

Organized by COD Cares, the initiative asks participants to “Serve the Needs of Others in Winter,” by adopting a partner agency or granting holiday wishes for families and children in need. View photos from this week’s Up to S.N.O.W. Good kickoff event.

Fox Valley Mall in Aurora will host two “Soothing Santa’ events for children with special needs on Dec. 1 and 8.

The event is a sensory-friendly opportunity for children with special needs and their families to enjoy a visit and take professional photo with Santa Claus in a calming environment before the mall opens to the public.

Crafts, coloring and snacks will also be provided. The free event takes place from 9:30-11 a.m. in Santa’s holiday home on the Lower Level in the Macy’s Court.

As part of an extensive board-led succession planning effort, John Diederich will become the new president and CEO of Rush Copley Medical Center in Aurora.

Diederich has appointed Mary Shilkaitis to be senior vice president of operations and chief operating officer.

Since Finn’s arrival in 1996, Rush Copley experienced expansion of clinical services and is regularly recognized nationally for excellence in patient safety, health care equality and maintaining financial strength and stability.

Finn was instrumental in leading the integration with RUSH in 2017.

During his time as CEO, Rush has made more than $300 million in capital investments — including the building of Rush Copley Healthcare Center on a 45-acre campus in Yorkville, the creation of six Rush Convenient Care centers, and the implementation of a best in class electronic medical record system.

Rush Copley Medical Group has grown from 12 to more than 130 providers and achieved record high scores for employee engagement, which he also inspired in donors. During his tenure, Rush Copley received more than $30 million in philanthropic contributions and saw the creation of critical free services, all supported by philanthropy, including Waterford Place Cancer Resource Center and Rush Copley’s Movement Disorders Program.

Finn was the seventh CEO in Rush Copley’s 133-year history, a position he held since 2002. He also served as chief financial officer from 1996 to 1999 and chief operating officer from 1999 to 2002. In addition, he held the title of senior vice president and hospital integration officer for

Two officers shot in the line of duty during February’s Henry Pratt mass shooting are returning to full-duty after spending the past nine months recovering.

Officer Adam Miller was shot in the face as officers tried to confront the shooter in the early stages of the incident. After he was shot, Miller was heard over the police radio saying, “I’m shot — still in the fight.”

“His resilience and fighting spirit have been an inspiration to us all,” Aurora Police Chief Kristen Ziman said.

Officer Rey Rivera also returned to full duty last week. Rivera was shot in the leg during the incident and has spent the last nine months undergoing physical therapy and regaining full use of his leg. Rivera is presently assigned to APD’s day shift.

Three other officers were shot during on that day in February. Officer James Zegar returned to full-duty shortly after the shooting. Officer John Cebulski and Officer Marco Gomez continue their recovery and are on restrictive duty assignments with the department.

“On behalf of a grateful police department, thank you for the love and support you have given our officers as they have fought their way back to wellness,” Ziman said in a statement. “We also wanted to take a moment to remember the five employees killed on that day. Trevor Wehner, Josh Pinkard, Russell Beyer, Clayton Parks and Vicente Juarez’s memories will always live on in the city of Aurora and with the Aurora Police Department.”

Transformco, the parent company of Sears and Kmart, has announced plans to close 96 stores by February, including one in West Dundee.

Going-out-of-business sales at these stores are expected to begin on Dec. 2.

According to a company news release, following the closures, Transformco will operate 182 stores.

The Sears store in West Dundee is located at 5000 Spring Hill Mall.

A second Sears store in Illinois, located in Peoria, is among the 96 slated for closure.

Transformco is controlled by Sears’ former CEO Edward Lampert and his hedge fund.

Since purchasing substantially all the assets of Sears Holdings Corporation in February 2019, Transformco has faced a difficult retail environment and other challenges.

Transformco said it is trying to create and deliver value through a strategic combination of better-performing retail stores and service businesses, brands and other assets, and expect to realize a significant return on its extensive portfolio of owned and leased real estate.

Huntley Police have determined that a child’s report of biting into a tampered Kit Kat bar was fabricated.

In a Nov. 9 news release, Huntley Deputy Chief Mike Klunk said the investigation revealed that the child’s statement “was found to be fabricated and deemed unfounded.”

“Due to the age of the juvenile, there will be no criminal charges, and consequences will be handled by the parents,” he said.

The original report said police were investigating a tampered piece of candy that a child may have received while trick or treating, possibly in the Talamore subdivision.

According to the Nov. 7 Huntley Police Department news release, the resident reported a small Kit Kat bar with what appeared to be a large sewing needle inserted in it that was discovered when the child bit into the candy.

The initial report said at the time it was “unknown where or when the object was inserted into the candy.

“The entry point of the needle was visible on the exterior of the candy wrapper,” the report said.

No one was injured in the incident.

She has raised more than $200,000 in grants and donations as well as co-authored content to redesign the main gallery Geneva’s Story. These efforts and more have raised awareness and earned former Rep. Randy Hultgren’s nomination for the 2015 National Medal of Museums and Libraries Award.

Before taking over as history museum executive director, Emma was the student activities director for Geneva High School.

A Chicago man faces a possible prison sentence for pretending that a truck he parked outside of the Hollywood Casino in Aurora contained an explosive device.

Kane County Assistant State’s Attorneys Joseph Cullen and Jake Matekaitis presented evidence during the four-day trial that the evening of Feb. 12, 2019, Muadinov intentionally led officials and police at the Hollywood Casino in Aurora to believe that a bomb was concealed in a box truck he parked in front of the casino, prompting the evacuation of approximately 175 casino patrons and employees.

Muadinov faces a sentence between two and five years’ imprisonment in the Illinois Department of Corrections, or probation.

Tegeler revoked bond and ordered Muadinov to remain in custody at the Kane County jail, where he has been held since his arrest in lieu of $900,000 bail.