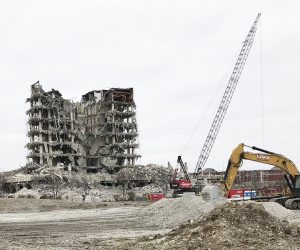 The last remnants of the old McDonals’s corporate offices in Oak Brook are nearly history as crews continued to tear down a remaining high rise near the Oak Brook Mall. (Photo by Jack McCarthy / Chronicle Media)

After winning its second-round game in as wild an offensive shootout as the NCAA Division III Football Championship has seen, the North Central College Cardinals turned to their defense to put them in position to win their national quarterfinal matchup last Saturday at Benedetti-Wehrli Stadium.

The fifth-ranked Cardinals held ninth-ranked Delaware Valley University (Pennsylvania) scoreless until early in the second half, allowing the hosts to build an early 17-0 lead and hold on for a 31-14 triumph to send North Central into the second national semifinal in its history and the first since 2013.

“We’re thrilled to continue to play,” said North Central head coach Jeff Thorne. “I thought our defense was fantastic this week. From the second half last week and throughout this game, they really played great and we’re going to need that to continue.”

The Cardinals move on to take on No. 4-ranked Muhlenberg College (13-0) in the semifinals next Saturday, which will mark the first-ever meeting between the two programs. The site of the game and its start time will be announced on Sunday.

Wheaton College lost 34-33 to St. John’s (Minn.) last Saturday in an NCAA quarterfinal match. Wheaton closes its season with a 12-1 record, posting only the second 12-win season in program history. St. John’s is now 12-1 on the season and advances to next Saturday’s NCAA Division III National Semifinal against UW-Whitewater.

Anglers of all ages are invited to test their skills at the annual Hard Water Classic ice fishing tournament on Saturday, Jan. 11 from noon to 3:30 p.m. on the Forest Preserve District of DuPage County’s Silver Lake at Blackwell Forest Preserve in Warrenville.

The top three catches of largemouth bass, bluegill, northern pike and crappie will receive gift cards of $125, $100 and $75 to local sporting goods stores. The angler with the largest fish overall will win a gas-powered auger or ice shelter. Registrants will also have a chance to win door prizes, such as a gas-powered auger, ice shelter, tip-ups and rod-and-reel combinations.

Registration is $20 in advance online or $25 at the event. Proceeds will support ranger-led recreation programs that provide outdoor experiences for special-needs groups, youth groups, Scouts and community resource centers in DuPage County.

Check-in is 11 to 11:45 a.m., and tournament fishing runs noon to 3:30 p.m. Participants must bring their own gear and bait and comply with all applicable fishing regulations and tournament rules. Anglers 16 and older who are not legally disabled must carry valid Illinois fishing licenses.

The main entrance to Blackwell Forest Preserve is on Butterfield Road 0.25 mile west of Winfield Road.

“When we opened our doors 30 years ago, I had one simple goal in mind, always take care of our

customers,” said Dominic Pugliani, President of Pugi of Downers Grove. “Always make sure to give them a great experience and a great deal, and after 30 years in business, we’re still making buying a car from Pugi a beautiful thing.”

IL that has been serving customers for the past 30 years!

For more information on the Pugi of Downers 30th Anniversary Event, contact Gary Nudelman at

A draft of the Naperville Park District’s proposed 2020 Budget is now available for public review online at https://www.napervilleparks.org/about/finances/cafrbudgettreasurersreport.  A paper copy may be viewed at the Park District Administration Building, located at 320 W. Jackson Ave., and at Fort Hill Activity Center, located at 20 Fort Hill Drive.

The Naperville Park District Board of Park Commissioners will vote on the adoption of the 2020 Budget at the December 12, 2019 meeting to be held at 7:00 p.m. at the Naperville Municipal Center, located at 400 S. Eagle Street.

The 2020 budget will support capital projects that help the District develop, expand and take care of parks and facilities to serve the community. A major project that began in 2019 and will be completed in 2020 is the development of Wolf’s Crossing Community Park in the southwest area of the city.

A second initiative planned to be completed in 2020 is the 95th Street Community Plaza at Frontier Sports Complex, just south of the 95th Street Library.  In partnership with School District 203 the Park District will continue a multi-year project to redevelop the athletic fields at Knoch Park.

The 2020 operations budget will support the District’s commitment to continuous improvement, including a plan to attract and retain both seasonal and full time staff in a competitive labor market. The District also will develop a plan to address community indoor space needs, now that Fort Hill Activity Center has reached capacity in key program areas and cannot be built out further.

A 44-year-old Kane County deputy was charged last week with the use and possession of cocaine.

Sgt. Aaron Feiza, 44, is charged by Kane County State’s Attorney Joe McMahon in a one-count indictment with unlawful possession of a controlled substance, a Class 4 felony.

The indictment states that on Feb. 10, Feiza was unlawfully in possession of cocaine.

If convicted, Feiza faces a sentence of between 1 and 3 years’ imprisonment in the Illinois Department of Corrections, or probation.

According to the Kane County Sheriff Ron Hain, Feiza has worked for the office since January 7, 2004.

“When the Illinois State Police notified my office in August that it was investigating these allegations against Sgt. Feiza, I immediately placed him on paid administrative leave pending the outcome of the investigation,” Hain said in a statement. “The community expects, as I expect, that law-enforcement officers will obey the law. If police fail to meet that expectation, we are obligated to respond accordingly to maintain the public’s trust.”

Inaugural poet laureate has ‘already been doing the work’

The co-founder of A-Town Poetics will now serve as the poetic voice of the state’s second largest city.

“When you look at Karen’s history and impact on our community, it is evident she has already been doing the work of a poet laureate for many years,” said Irvin.

A retired urban planner and executive with the City of Aurora, Fullett-Christensen has written several collections of poetry and creative non-fiction. She has completed 16 self-published manuscripts and is currently working on her 17th body of work, many of which have been published in the Downtown Auroran Magazine, in the High Holidays prayer book for the Aurora Jewish Renewal Congregation and on a variety of online sites.

Her poetry has been used for a number of public presentations, including exhibits for National Poetry Month in collaboration with the Illinois State Poetry Society.

“Poetry is a way in which people from all walks of life and backgrounds can share their experiences, relate to one another as human beings, develop self-awareness and connect to the natural world,” said Fullett-Christensen. “Poetry can lend elements of celebration, joy and seriousness to all observances, recognitions and dedications.”

The other finalists – Quentin Johnson, Fermina Ponce and Anthony Stanford – will all serve as Aurora Poet Ambassadors in deputy poet laureate roles. In addition, one high school student will be added to the group early next year.

In January, a public installation ceremony will be held at Gwendolyn Brooks Elementary School in Aurora. The school is named in honor of former Illinois Poet Laureate, Gwendolyn Brooks, who died in 2000.

“We appreciate the support of Rep. Lori Trahan (D.-Massachusetts), David McKinley (R-W. Va.) and the members of the task force in standing up for Minor League Baseball and speaking out against MLB’s effort to cast off thousands of jobs, reduce affordable, family-friendly entertainment and undermine grassroots support for our great game,” said Cougars Vice President and General Manager Curtis Haug.

While the Kane County Cougars were not on the list of teams facing the possibility of elimination under the MLB proposal, the Cougars will remain vigilant and united with all Minor League Baseball teams in opposition to the MLB plan.

Minor league teams are vital to the social and economic lives of millions of Americans; they support scores of local businesses and jobs, provide accessible entertainment, help promote tourism spending and donate tens of millions of dollars in charitable contributions.

“With this proposal, MLB is willing to break the hearts of dozens of communities across the country,” said Haug. “We are going to resist this plan and are gratified that so many in Congress are willing to join with us.”