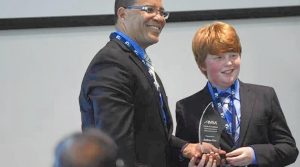 Jose Torres, president of the Illinois Mathematics and Science Academy, presents student Joshua Orr with the Tellabs Foundation Next Generation Innovators Award. Joshua was one of four who received the inaugural award, which recognizes entrepreneurial-minded middle school students from across Illinois.

Travel to New York City for guided tours of some of the greatest art museums in the world as part of “New York City: Art and Visual Culture,” a new course offering this winter through the College of DuPage Field Studies and Experiential Learning program.

The class meets for two days prior to the trip, which is scheduled for Jan. 7-Jan. 13, 2018, and is led by COD Art Professor David Ouellette. Students will explore the Metropolitan Museum of Art, the Museum of Modern Art and many others.

In addition to MoMA and The Met, participants will visit The Guggenheim Museum and the Frick Collection as well as viewing art at smaller galleries. During the class sessions prior to the trip, students will learn how to research and explore art museums. Participants then will complete a project on the trip, followed by two more class sessions upon their return.

The cost of the trip is $940, which includes round trip airfare, hotel accommodations, daily continental breakfast, entrance to all museums and unlimited ground transportation. Tuition is extra.

The DuPage County Health Department will receive $1.5 million in federal funds over the next four years to provide training and medication for emergency treatment of opioid overdose.

The First Responders — Comprehensive Addiction and Recovery Act grant will provide training and medication for emergency treatment of opioid overdose.

Donations of new or gently used winter coats, jackets, hats, scarves, boots and gloves will be delivered to the People’s Resource Center in DuPage County for distribution to area families. All sizes of clothes – from infant to adult – will be accepted.

The drop-off locations and hours are:

Elmhurst College has its highest enrollments in the college’s 146-year history, both for new students as well as the overall population. The historic numbers coincide with several recent achievements at the College that benefit those students, from greater financial stability to national recognition for Elmhurst’s undergraduate teaching.

At 3,529, the record-setting number includes members of the first-year class, transfer students, new traditional part-time students, new graduate students and new students enrolled in the Elmhurst Learning and Success Academy, along with returning students. This population includes the Class of 2021, a historic group in its own right because its members will graduate during the college’s sesquicentennial year.

Ditka to speak about winning

Mike Ditka personifies toughness and drive, whether as the fearless leader of the 1985 NFL Champion Chicago Bears or the head of a business empire. With 40 years in the NFL and Super Bowl wins as a player, assistant coach and head coach, Ditka has parlayed his signature image into an unmistakable brand that has defined his work as a national sports commentator and successful restaurateur.

On Oct. 19, Ditka will share what he’s learned over a lifetime of commitment to the fundamentals—and the victories that resulted—when he presents “On Leading and Winning,” part of the Roland Quest Lecture Series at Elmhurst College. The speech will be held in Hammerschmidt Memorial Chapel. Admission is $10 for the general public and free for Elmhurst College students, faculty, staff and alumni. For tickets, go to elmhurst.edu/tix. For more information, call (630) 617-5186.

Ditka is a three-time Super Bowl champion, playing on the Dallas Cowboys Super Bowl VI team, working as an assistant coach for the Cowboys in Super Bowl XII, and coaching the Bears to victory in Super Bowl XX. He was named to both the NFL’s 50th and 75th Anniversary All-Time Team, and is a member of the Pro Football Hall of Fame.

A 13-year-old Naperville boy was one of four students to win the 2017 Tellabs Foundation Next Generation Innovators Award.

Four applicants received the inaugural award, which recognizes entrepreneurial-minded middle school students from across Illinois. The winners each developed a product or working prototype that would make a positive social impact.

Orr is a student at the Illinois Mathematics and Science Academy in Aurora.