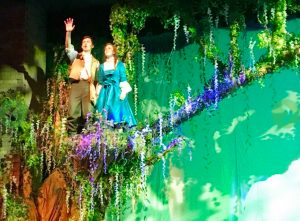 This is a scene from York High School’s spring musical, ”Tuck Everlasting,” which has received four nominations from the Illinois chapter of the National High School Musical Theatre Awards. Winners will be announced June 4.

It is the time of year for turtles to cross roads in search of water, food, mates or nests. The Forest Preserve District of DuPage County cautions drivers to watch for turtles on the roads through October.

Female crossings increase from mid-May to mid-July as the turtles leave their watery homes in lakes and streams to make their way to and from drier nesting sites where they lay their eggs.

Forest Preserve District officials suggest that if drivers decide to help a turtle on the road, they should safely pull over and turn on the vehicle’s hazard lights. Helpers should avoid touching the turtles because some will bite or scratch. Rather, samaritans should urge the turtle across the road using a car mat or something similar. If necessary, a turtle should be picked up with two hands toward the back of the shell and never by the tail. Turtles should be helped across the road in the same direction they are heading.

Willowbrook Wildlife Center employees and volunteers are available to answer questions from 9 a.m. to 5 p.m. daily at 630-942-6200.

Members of the renowned Chicago Children’s Choir will join the Bethel United Church of Christ, 315 E. St. Charles Road, Elmhurst, for the 10 a.m. worship service June 3. The guest performers are from the Austin and Englewood Neighborhood Choirs of the Chicago Children’s Choir. The congregations will enjoy a morning of festive and uplifting worship in a service of unity through word and music.

The theme is “One Body, One Spirit, One Chicago.”

Forty young people from the neighborhood choirs, under the direction of Keshena Luckett and Lonnie Norwood Jr. and accompanied by Bethel musicians, will sing throughout the service, inspiring worshipers with music of African-American and contemporary origins.