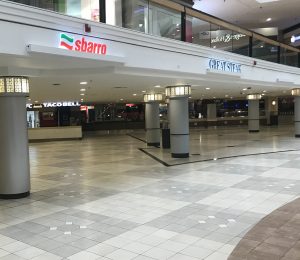 Tables and seating have been removed from Fox Valley Mall’s food court and food operations are only offering servings to go. (Photo by Jack McCarthy / Chronicle Media)

The Fox Valley Mall’s scheduled reopening on Monday was short-lived.

The sprawling shopping center, closed since March 20 due to COVID-19, was officially open for less than five hours when Aurora Police recommended a shutdown, following reports of potential protests in the area.

Monday’s early closure came less than 24 hours after mayhem and vandalism in downtown Aurora, following a Sunday march protesting police involvement in the recent death of an African-American man — George Floyd — while in police custody in Minneapolis.

“(Mall) businesses are advised that they should close for the day,” Aurora Police stated in a tweet. “Please avoid the area.”

The mall remained closed on Tuesday. By afternoon the City of Aurora issued an advisory asking residents to avoid the mall area, part of an order extending a citywide curfew for another night as well as closures of downtown streets and Interstate 88 entrances and exits.

But on Wednesday, it was back to business as mall parking lots were partly filled and shoppers finally had a chance to venture inside.

In the wake of a coronavirus pandemic that shut down economies in the state and around the nation, the 1.5 million-square-foot retail center was ready to welcome shoppers after it adopted practices designed to keep them safe from potential virus exposure.

“We’ve been working on reopening since the day we decided to close,” said mall General Manager Scott Samson. “The key thing is to make sure our shoppers feel safe coming back in this new normal.

“We are ready, excited and just want to welcome everybody back.” 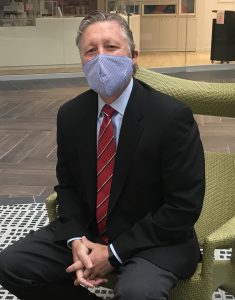 Masks and social distancing are musts and mall hours are relatively limited (11 a.m.-7 p.m. Monday-Saturday and noon-6 p.m. on Sunday). Chairs scattered through the mall’s common areas are placed at least six feet apart while food court tables and chairs have been removed. Food service will strictly be to-go.

The mall plans to be extra-attentive to cleanliness, even installing equipment that projects intense ultraviolet light that helps keep escalator rails uninfected. Restrooms feature new shields and hand dryers have been removed, replaced by paper towels.

“The high-touch areas will get deep cleaning. We’ll close it down twice a day,” Samson said.

With occupancy limited to 50 percent of normal, Fox Valley will also monitor the number of shoppers. But individual stores are expected to keep closer tabs of how many customers they attract to limit numbers inside and to maintain social distancing.

“Some stores may have to ask customers to wait until someone leaves,” Samson said.

In this first stage of reopening, Samson expected about half of the mall’s more than 120 stores and services — including anchor store Macy’s — to be operating at the outset.

“At this point we have a little bit over half of our stores that were stocked and ready to reopen today, including Macy’s, with all of them by the end of the week,” Samson said.

Getting retailers to this point was a priority for Samson and his staff.

“In many cases we were just as busy if not busier during the down time,” he said. “There was a lot of time keeping up a relationship and dialogue with every one of our retailers and making sure we worked any rent deferment issues, anything that would keep them from reopening and feeling comfortable. As a result, I’m not aware of any stores that are not going to open.” 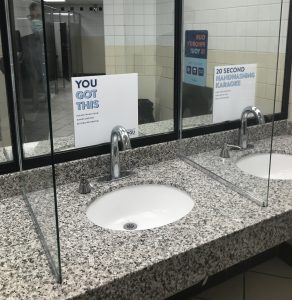 Sinks in bathrooms are now separated by plexiglass for safety and to prevent potential COVID-19 transmission. (Photo by Jack McCarthy / Chronicle Media)

Shoppers can enter through all four main entrances, plus Macy’s. Mall entries will be staffed with personnel to offer masks and hand sanitizers and answer questions.

Along with health and safety concerns, mall officials are also cognizant of security especially in the wake of the post-protest march destruction and looting in and around downtown Aurora on Sunday followed by Monday’s police warnings.

“We have an excellent relationship with our local police departments,” said Samson. “One of the reasons we decided to reopen on schedule today is our confidence with our partners.”

The mall generates millions of dollars in tax revenues for Aurora and anchors a shopping/dining/entertainment stretch along Illinois Route 59 that’s shared by the city and next-door Naperville.

Fox Valley has lost two anchors (Carson’s and Sears) in recent years and JC Penney recently filed for bankruptcy protection and may close some stores around the nation. But it has also welcomed new businesses this month, including Pandora Jewelry and The Comedy Shrine.