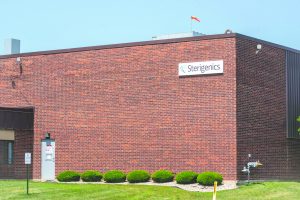 Sterigenics, a medical supply sterilization company linked to increased cancer rates in the Willowbrook area, has been closed since it was barred in February from using ethylene oxide. On Friday, the Illinois Environmental Protection Agency approved a construction permit that would allow Sterigenics to install equipment that would help it meet strict emissions standards established by legislation passed this year by the General Assembly. (Photo by Jerry Nowicki/Capitol News Illinois)

SPRINGFIELD — The Illinois Environmental Protection Agency approved a construction permit Sept. 20 that will allow a medical supply sterilization plant linked to increased cancer rates to install new equipment that must be in place before it is allowed to reopen.

The IEPA issued a news release announcing the permit for Sterigencis, the Willowbrook sterilization plant that has been barred by the state from using the cancer-causing gas ethylene oxide since February, at 5:12 p.m. Sept. 20.

The permit issuance comes as the General Assembly is considering two new bills that would phase out ethylene oxide emissions except in sparsely populated areas and give home rule municipalities the authority to ban emissions of the gas.

Even with the permit, Sterigenics must comply with stringent new regulations resulting from a pair of bills — Senate Bills 1852 and 1854 — that were signed into law in June and a legal agreement between the state, DuPage County and Sterigenics.

“This construction permit is a direct result of legislation passed by the General Assembly and will allow Sterigenics to attempt to bring the facility in line with the nation’s strongest emissions control law,” IEPA Director John Kim said in a statement. “This is the first step in a lengthy process, and only following strict testing and monitoring requirements would the facility be permitted to operate. As we move forward, the Illinois EPA will continue to provide technical guidance to legislators as they draft further legislation to strengthen their initial law.”

To reopen, Sterigenics must first install a permanent total enclosure, capturing all ethylene oxide emissions from the facility, and must install additional air pollution controls to reduce emissions by 99.9 percent or to 0.2 parts per million. The permit gives the company the authority to install such equipment.

The facility must also submit various emissions testing results to the state EPA, along with an ambient air monitoring plan among other regulations and reporting requirements.

The company will be allowed to emit just 85 pounds of ethylene oxide per year, a sharp decrease from previous IEPA permits issued from 2006 to 2018, which allowed Sterigenics to emit between 2,840 pounds and 7,340 pounds per year, depending on the year.

Members of Stop Sterigenics, a DuPage County group that has vocally opposed any pathway for Sterigenics to resume operations, gathered outside of the closed Willowbrook plant Friday after the IEPA announcement to protest the decision that could allow it to reopen.

In a video posted to Facebook Live, members of the group said they were unsurprised by the granting of the permit and the timing of the announcement, but they vowed to continue the fight to keep Sterigenics closed.

Illinois House Minority Leader Jim Durkin vowed the same. Durkin is a Western Springs Republican who is sponsoring House Bill 3885 to give home rule municipalities the authority to ban ethylene oxide emissions within their borders.

“The IEPA’s approval of the Sterigenics construction permit is disappointing, discouraging and downright wrong,” he said in a statement.  “Our fight is not over. We will continue working to pass new legislation in veto session that will allow municipalities to ban the use of ethylene oxide within their boundaries.”

After the permit was granted Friday, Pritzker’s office gave an endorsement to new, stricter legislation to regulate ethylene oxide that is likely to be on the agenda when the General Assembly returns to Springfield during the last week of October.

“Upon taking office, Governor Pritzker’s administration shut down Sterigenics. During the shutdown, the governor asked the General Assembly to pass the strictest possible law on ethylene oxide emissions. It’s clear now that the legislation was insufficient, so during the upcoming veto session, the governor expects that the General Assembly will strengthen the law they passed this spring. He is committed to signing the measure and the administration will strictly enforce it,” spokesperson Jordan Abuddayeh said in a statement.

The other bill being considered by the General Assembly is sponsored by Rep. Rita Mayfield, a Waukegan Democrat who represents a Lake County area that contains two ethylene oxide emitters – Vantage Specialty Chemicals and Medline Industries.

Mayfield’s House Bill 3888 provides that by 2021, no sterilization company can use ethylene oxide within five miles of a region with a population density of at least 10 residents per square mile, or within the same distance from a school or day care. Hospitals using the gas would have to meet the same requirements by January 2022, while critical access hospitals would have until 2025. Those outside of dense areas and not within range of a day care or school would be allowed to emit no more than 30 pounds of ethylene oxide annually.

In a responsiveness summary posted to the IEPA’s website, the agency said it received more than 500 public comments regarding the permit issuance, most of which “generally expressed disapproval of the project.”

In that summary, the IEPA addressed concerns and pointed to Illinois law as the reason for allowing the permit.

“Under the Environmental Protection Act, the Illinois EPA is required to issue a permit to an applicant upon proof that the proposed facility or equipment will not cause a violation of the Act or promulgated regulations,” the summary stated. “This standard is a mandatory one, expressed in the language of the provision as a ‘duty’ that is imposed upon the Illinois EPA. While agency deliberation of certain aspects of the permit may be grounded in the exercise of discretion, the broader legal standard governing permit issuance or denial limits the discretion of the Illinois EPA.”