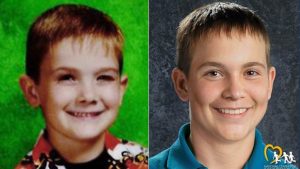 Timmothy Pitzen (left) at the time of his disappearance in 2011 when he was 6. A new forensic image (right) was released last week of what he may look like today.

The 10th anniversary of Timmothy Pitzen’s disappearance passed last week without the mystery any closer to resolution.

But the case of the Aurora youth — who vanished at age 6 while on a trip with his mother — has not receded into misty memory.

“It haunts everyone who works on this case,” said Aurora Police Lt. Greg Spayth at a media gathering on May 11. “It’s the unknown. We don’t know, is Timmothy alive somewhere?”

Investigators hope the release of a new high-resolution image of Pitzen using age-progression technology will help.

The hope is that the photograph, created by the Virginia-based National Center for Missing and Exploited Children, will show how Pitzen might look a decade after leaving school with his mother, Amy Fry-Pitzen, on May 11, 2011.

“Our investigation remains active and we’re committed to finding answers for the Pitzen family,” Chief Kristen Ziman of the Aurora Police Department said in a statement. “We hope this new image created by NCMEC forensic artists will allow someone to recognize what Timmothy might look like today and help us find him.”

Timmothy Pitzen’s mother removed him from Aurora’s Greenman Elementary School and embarked on a three-day holiday to Brookfield Zoo and Illinois and Wisconsin resorts.

His father Jim Pitzen had dropped him off to school that morning and went to pick him up, only to be told his wife had taken the boy out of school earlier that day reportedly citing a family emergency.

Mother and son appeared in video evidence from various stops during the trip and tracking evidence showed the progression of their travels through northern Illinois and southern Wisconsin.

Timmothy Pitzen was not with his mother when she committed suicide in a Rockford motel. She left a note stating Timmothy was safe and would never be found. Her body was discovered on May 14, 2011.

Extensive investigations involving police agencies throughout Illinois and Wisconsin and even nationally ensued but no solid clues emerged.

Hopes were briefly raised in 2019 when an Ohio man claimed to be the missing youth.

Sharonville, Ohio police were approached by a man — later identified as Brian Michael Rini of Medina, Ohio — who claimed to be Pitzen. He said he had escaped from a Red Roof Inn in southern Ohio after allegedly being held captive and abused by two men.

FBI and Aurora police investigators quickly discounted the story and Rini retracted his claim when DNA evidence showed he could not be Pitzen. In late 2020, Rini was convicted and sentenced to a two-year jail term and one year of probation.

The case has drawn widespread attention both locally and around the nation. A report on ABC’s 20/20 news magazine program was reported to be Rini’s inspiration for his impersonation in 2019.

NCMEC has also produced previous age progression images of Pitzen, the last in 2015.

“We know that our age progression photos help bring home missing children,” said Angeline Hartmann, director of communications at NCMEC. “Because Timmothy has been missing since 2011, it can be tough to look at this image and realize that little Timmothy is now 16 years old. But this is the face that we ask everybody to look at closely, because we know that it’s one way he can be found.”

“It’s hard to believe that we have been searching for Timmothy for 10 long years now,” Timmothy’s father, Jim Pitzen said in a statement. “We believe he is out there and we hope every day that he will make his way home.”