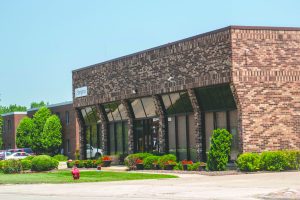 Sterigenics, a medical supply sterilization company linked to increased cancer rates in the Willowbrook area, has been closed since it was barred in February from using ethylene oxide. On Friday, a DuPage County judge approved a consent order that will allow Sterigenics to reopen if it meets stringent new requirements. (Photo by Jerry Nowicki/Capitol News Illinois)

One state lawmaker, however, has filed a bill that would give certain local municipalities the authority to ban emitters of ethylene oxide, a known cancer-causing gas, from operating in their communities.

“Sterigenics continues to prove they cannot be trusted and have no place in our region,” Illinois House Republican Leader Jim Durkin said in a statement.

Durkin filed House Bill 3885 Friday to allow home rule municipalities including Willowbrook to “impose additional operating restrictions” or prohibitions above and beyond state law on companies that emit ethylene oxide.

Home rule is a status that state law confers to any municipality with more than 25,000 residents or other municipalities that choose to adopt it by referendum. Those municipalities have greater authority to control their own local affairs. According to the Illinois Municipal League, 217 of Illinois’ 1,298 incorporated municipalities have home rule powers.

“If the Illinois (Environmental Protection Agency) continues moving forward in issuing permits, then we must do everything we can to empower our local municipalities in their fight to keep Sterigenics closed for good,” Durkin said.

Sterigenics has been closed since February, when Democratic Gov. J.B. Pritzker ordered the IEPA to issue a seal order on the company’s use of ethylene oxide. The consent order paves the way for Sterigenics to continue its use of the chemical if it installs new systems to capture and control emissions and submits plans for testing the new systems to be reviewed and approved by the IEPA.

The company must also prove it meets the stringent requirements set forth in the consent decree and Senate Bill 1852, a measure sponsored by Durkin and signed by Pritzker earlier this year. That law prevents sterilization facilities from operating in Illinois unless they capture 100 percent of all ethylene oxide emissions within the facility and reduce ambient ethylene oxide emissions to 0.2 parts per million.

“To be clear, nothing within the consent order guarantees that the Willowbrook facility will reopen in the immediate future – or that it will reopen at all,” Raoul and Berlin said in their release. “Under the consent order, Sterigenics’ Willowbrook facility is strictly prohibited from resuming sterilization operations until it constructs new emissions control systems that have been reviewed and approved by the Illinois EPA. The attorney general’s office, the state’s attorney’s office and the court will be closely monitoring each step Sterigenics takes to potentially reopen.”

Raoul and Berlin also said the new requirements allow the company to emit just 85 pounds of ethylene oxide per year, a sharp decrease from previous permits issued by the IEPA that allowed the company’s high level of emissions. From 2006 to 2018, Sterigenics was permitted to emit 2,840 pounds to 7,340 pounds per year, depending on the year, the news release said.

While Raoul’s office noted the process for Sterigenics to reopen could take several months, representatives of Sterigenics said in a release the company “has always operated safely” and “will continue to work to complete the permitting process.”

“During today’s proceedings, the court noted that the state has acknowledged that there is no uncertainty that Sterigenics has operated in compliance with federal standards regarding its ethylene oxide (EO) emissions,” the statement read. “Further, the state indicated in its briefing that compliance with the consent order and the new Illinois law regarding EO sterilization ‘will ensure that [EO] emissions from the [Willowbrook] site are negligible and not a public health hazard.’”

Sterigenics also called attention to the fact that the legal agreement resolves all litigation between the company and the state “with no finding of liability or fault against either side and with no imposition of penalties.”

Durkin, however, was joined by Rep. Deanne Mazzochi, an Elmhurst Republican and co-sponsor of HB 3885, and state Sen. John Curran, a Downers Grove Republican, in calling for a special session to prevent Sterigenics’ reopening.

Pritzker’s office said in July he was “willing to sign any measure, up to and including a ban, on the use of ethylene oxide in the state of Illinois” and willing to call a special session “to allow for an immediate vote on a bill that is constitutional and will fix the perceived shortcomings of the legislation (Durkin) previously sponsored.”

On Friday, Emily Bittner, Pritzker’s deputy chief of staff for communications, said the governor “is pleased” Durkin is “proposing a solution to strengthen” the original legislation, and said it could become a topic for discussion during the fall veto session in October and November.

“(Pritzker) looks forward to immediately reviewing the measure, and he will support it unless there are constitutional concerns,” Bittner said in a statement. “… To move quickly, he urges Leader Durkin to begin the legislative process on this new bill, including building consensus for this approach, holding hearings and scheduling votes for the relevant committees.”

In August, a spokesperson for the IEPA said there are 26 facilities in Illinois permitted to use or emit ethylene oxide.

Four lawsuits were recently filed in Cook County against two other ethylene oxide permit holders, chemical producer Vantage Specialty Chemicals in Gurnee and industrial medical sterilizer Medline Industries in Waukegan. Both municipalities have home rule powers, according to the IML.

The four lawsuits, filed by individuals who were stricken with cancer while living near the facilities, allege that for many years, Vantage and Medline have “knowingly emitted dangerously high levels of ethylene oxide” into surrounding communities, and those living in the area “face some of the highest long-term cancer risks in the United States.”

A spokesperson for Edelson PC and Tomasik Kotin Kasserman, the Chicago law firms representing the four plaintiffs in the lawsuits, said they anticipate “many more to come.”