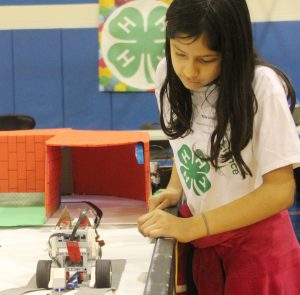 Forty teams of middle-school students from DuPage, Kane and Kendall counties displayed their technical and teamwork skills during the Fourth Annual 4-H Robotics Showcase in Elgin on Saturday, April 9.

This year’s ‘DogBot Challenge’ combined robotics design and programming with a canine theme.

Congressman Randy Hultgren, R-14th District (Wheaton), spoke at the opening of the event and recognized Illinois 4-H programs, local school districts, and the many teams, volunteers and families, as well as Altria, which provided a grant to fund 4-H robotics in this area.

Hultgren, who serves on the Science, Space and Technology Committee, has been a strong proponent of STEM programs, including Illinois 4-H Robotics and FIRST (For Inspiration and Recognition of Science and Technology). His son, Kole, also competed April 9, as one of the     4-H members on the “#Awesome” team from Kendall County.

“#Awesome” came out as the top dog, winning the Grand Champion honors. The team includes William Davis and Josh Greven of Newark; Adam, Audrey and Elijah Hartford of Yorkville; and Kole Hultgren of Plano, and is coached by Anna Hartford. 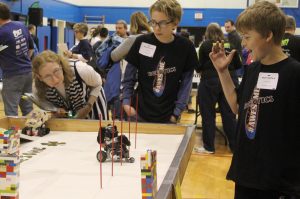 Team #Awesome of Kendall County earned Top Dog honors for this year’s DogBot Challenge at the 4-H Robotics Showcase in Elgin. 4-H’ers William Davis of Newark and Adam Hartford of Yorkville watch one of their “DogBots” run the poles obstacle, as a judge evaluates the performance. (Photo courtesy University of Illinois Extension)

“This was our largest showcase yet,” said Donna Nuger, 4-H Youth Development Educator with University of Illinois Extension. “Every team worked hard and learned from their experiences and from each other. This year’s DogBot challenge really highlights the technical skills and creativity of our youth.”

“These kids also develop critical life skills, like teamwork, organization, communication, and problem solving. Plus, we have lots of fun!” 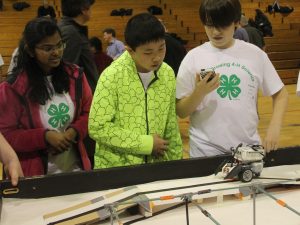 Members of Team “We Forget” watch and time one of their table runs during the 4-H Robotics Showcase on April 9 in Elgin. The group from Herrick Middle School in Downers Grove won an award for Best Table Performance with One Robot. (Photo courtesy University of Illinois Extension) 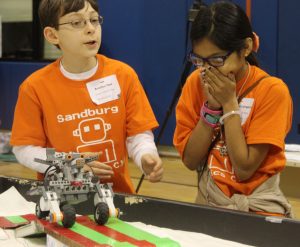 Sandburg Middle School (Elmhurst) students Bradley Dow and Stephanie Longoria cheer their DogBot through obstacles during a table run. The 2016 DogBot challenge required each 4-H team to design a robot and program it to perform agility and obedience tasks similar to that of a trained dog, such as running obstacles. (Photo courtesy University of Illinois Extension)

This Illinois 4-H regional event, which is the largest of its kind, was organized by volunteers and members of 4-H Robotics teams Blue Box Bots and Got Robot?, which both compete at the FIRST Tech Challenge level, and was hosted by Illinois 4-H and University of Illinois Extension at Abbott Middle School.

Many teams also have registered to participate in the 8th Annual State 4-H Robotics Competition later this spring in Champaign.