Sunny skies with 78 degrees provided banner weather for a garden party at The Morton Arboretum in Lisle Sept. 16.

The Friday afternoon party was The Grand Garden ribbon cutting at The Morton Arboretum.

The Morton Arboretum Board of Trustees and donors were joined by staff members who helped to design and construct what was also named at the ceremony as The Gerard T. Donnelly Grand Garden.

The garden opened to the public on Sept. 18. Special events were planned for families and visitors under blue skies.

Arboretum Board Chair Stephen C. Van Arsdell announced the dedication and naming of the central gathering space in honor of Gerard T. Donnelly of Lisle, president and CEO of The Morton Arboretum. Donnelly is retiring at the end of September. 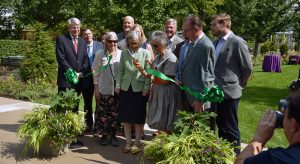 Van Arsdell and Donnelly thanked lead donors and others who contributed to the $16.6 million garden launched as part of the organization’s yearlong centennial celebration for 2022.

The construction and endowment were fully funded by donations and a $500,000 matching grant from the Illinois Department of Commerce and Economic Opportunity.

No additional funding is being sought for the garden, officials confirmed. 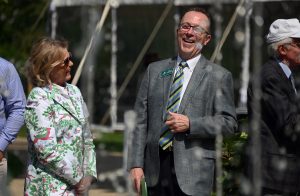 Susan Jacobson of Glen Ellyn, the arboretum’s head of site planning and design, has worked for the arboretum for 13 years.

The garden itself cost about $12 million for construction, “a lot of which is underground because we had to add all the infrastructure,” Jacobson said.

A $4 million endowment will provide for ongoing maintenance.

“We really wanted to have something grand to show the public and share with the public for this momentous occasion,” Jacobson said.

The garden was, “a kernel of an idea to start developing it back in 2019,” Jacobson added, and was designed through the COVID-19 pandemic with online Zoom meetings with infrastructure experts and design team members.

Construction started last summer, Jacobson said, “and it’s been a busy 12 months to get this done in time for our centennial celebration and the September grand opening.”

The garden is a fully accessible space. Along the path perimeter, visitors can expect to experience waterfalls and a diverse collection of plants with many of the collection flowering. 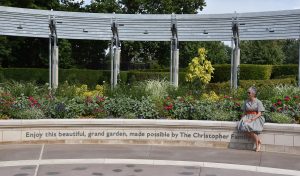 Lead donor Doris Christopher (right) of Hinsdale, founder and chairman of Pampered Chef, sits on a bench with writing in honor of the donor’s family. (Photo by Karie Angell Luc/For Chronicle Media)

Located behind the Visitor Center, the formal garden spans the length of two football fields and repurposes the footprint of the Arboretum’s former Hedge Garden dating to 1934.

Donnelly, who spearheaded the vision and fundraising for the project, said, “The centennial is a momentous time to bring this garden to reality, and I know it will be a place for members, visitors and future generations to find joy and celebration among trees and nature.”

“I’m delighted about the garden because it’s gorgeous,” said Donnelly, who did not know in advance of the naming announcement.

“I know it’s going to be a wow for our audience so I’m very excited about that.

“But I’m also very honored that our board of trustees saw fit to name it for me, not many people have a garden named for them, I’m so fortunate,” Donnelly said.

The expansive new garden has three main spaces, Centennial Plaza, the Celebration Garden and the Joy of Plants Garden. Each provides guests with a different experience, from plant-filled areas defined by hedges along a large fountain plus a plaza dedicated to Morton family descendant Jane Morton Berry. There is a terrace suitable for weddings and other special occasions.

Along Centennial Plaza is a bench berm named for the family of donor Christopher. Christopher was seen briefly seated on the bench that afternoon along permanent wording, “Enjoy this beautiful, grand garden, made possible by The Christopher Family.”

Those invited to lunch assemble at the end of the garden. (Photo by Karie Angell Luc/For Chronicle Media)

“It looks very nice,” Christopher said appreciatively. “It’s beautifully done, very subtle, and I love the phrase, because that’s really what the hope is that, you know … people will come and relax and enjoy it and walk through it.

“And it’s going to look different at different times of the year,” Christopher said.

“I think they’ve done a spectacular job, they really have.”

Established in 1922 by Morton Salt Company executive Joy Morton, the Arboretum is a nonprofit organization with a mission to plant and protect trees for a greener, healthier and more beautiful world, according to the Arboretum.

An expansive network featuring nine miles of drivable roads bring motorists to different topographies, from forest land to open areas with ponds. Guests can enjoy 16 miles of hiking trails and can now stroll and use mobility chairs at The Gerard T. Donnelly Grand Garden.